Don't go to London -- street art everywhere and stolen sh*t in the museums! The British are pirates, I tell you!
Anonymous

London is incredible. You should spend at the very least a week there. All the museums are free and the locals are all friendly and willing to help. Getting around is very easy when you use the underground. Go to Brick Lane and have some drinks. Also, for the ladies, go to Canary Wharf around 5 p.m. on a Friday -- there are loads of men at the bars who just got out of work!
Beverly Barnes-USA

I suggest to go to London for two weeks, visiting not only the central district but also suburban places like Hampstead, Richmond, Wimbledon, and Kew Gardens.
Antonello(Cagliari-Italy)

A good way to have a look at the town is to get on a bus.
Anonymous

If you are in London in September you should go to Proms in the Park -- great day out and a chance to see the British at their most patriotic! take your flags and a picnic and some wine.
Anonymous

If you're into the pub/club scene, take some time to visit the East End. Two of the best places I encountered were located there -- Elbow Room (with at least two locations, possibly more) and The Backpacker. Don't forget to check out Brick Lane for amazing, authentic Indian/Pakistani cuisine and great street vendors (be careful not to traverse down random alleys jutting out from Brick Lane, though).
Anonymous

Do the Red Bus trip around London. I gave it a miss because of the cost but someone else I knew did it and loved every second. It seems like it would be a great induction to the city to help give you a feel for where everything is and makes it a good way to pop in and out of some of the tourist attractions that you don't need a lot of time for.
Janine

The "Big Red Bus" and "Original Bus" tours are a great way to see London and top sights. Some routes have a live guide and some have recorded conmmentary. Busses are double decker, some with open tops. Pay one price for the day, hop on or off at any stop, Thames river tour included in price.
Anonymous

I suggest spending at least one week in London if it's the first time you go there. The best place in London for those who are keen on history (particularly the XXth century) is the Imperial War Museum on Lambeth Road (metro Lambeth North). The entrance is free. There are permanent exhibitions about the holocaust and "live" experiences of the trenches in the 1st World War or the bombings of London in the 2nd World War. Tanks, aircrafts, and guns are also in the hall. I spent there three days and I suggest it to everyone.
Davide Santi, Italy, 28 years old

I strongly suggest if going to London that you buy an A-Z book. It is very helpful with traveling the buses and tube stations as well as other attractions to see and places to eat.
Anonymous

Luton airports sometimes have cheaper flights and there is an amazing hotel there called the Red Lion Inn that is super cheap and about a five euro cab ride to the airport or the train station. We took the train from London to Luton and then flew out from there.
Anonymous

If you get a chance day trip into Kingston. It's about a 20 min train ride or only a 5 min ride from Heathrow. It's a beautiful town with lots of pubs on the Thames. Take a cruise down to the Hampton Palace and walkin the huge, beautiful gardens.
Anonymous

Remember that most of the museums here are free, so take advantage of that.
Anonymous

London is a fun, vibrant city with lots to see and do. My advice would be to spend at least a week here, to at least begin to appreciate what London has to offer. Perhaps the only downside is that it is quite expensive - you need to monitor your spending if you're on a budget.
Anonymous

If you like Castles and historic places and are spending a week or more in London and the rest of UK, then get the Great British Heritage pass before you leave home. You save heaps of money. For only around $80-$90 AUS you can get a pass for 15 days that gets you in free everywhere (except for Tower of London which is half price). Considering entry prices at castles and historic properties range from 8 - 15 GB pounds you save a lot. You can use it also at places like Roman Baths museum at Bath and at Stonehenge too. We used it in London for Hampton Court Palace, Kensington palace and Windsor Castle. You can also use it in Scotland, Wales and Northern Ireland.
Vanessa from Sydney

Be sure to take one of the London Walks tours - they're marvelous, cheap, and let you see and learn more about London than you could on your own!
Anonymous 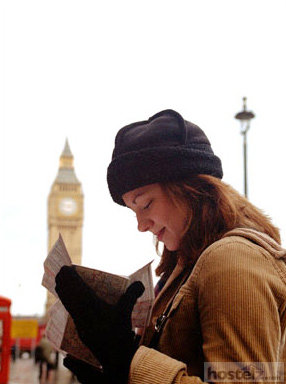 London is the bustling capital of the United Kingdom and offers everything and anything one could ever wish for. It is widespread and divided into numerous suburbs, which are all unique in their own way.

London hostels are abundant and you can find accommodation in every area of the city. Nice neighborhoods to stay in include Kensington and Paddington, which both offer a wide range of sleeping options. But really, it does not really make a big difference where your hostel is located since London has a comprehensive public transport system. It is possible to get literally anywhere within a reasonable amount of time.

In general, do not expect hostels in London to be spacious; rooms tend to be on the tiny side and it might be difficult to move around without running into something.

London's food is very cosmopolitan, and its cuisine scene extremely vibrant. For a good introduction to British food, try the East End Food Tour by Eating London. Or if the city's international offerings are more to your taste, try the Twilight Soho Food Tour for food and drinks inspired by London's diverse immigrant population.

London has three major airports that you might be flying into and countless options to get to the city. It is always a good idea to know which suburb you are heading to in order to figure out which bus or train to take to get there. Get a map of the London tube and ask for assistance at the counter. If you are staying for a couple of days, there are discounted multi-day tickets for the public transport which are good value.