49 hostels available. Prices start from $31 for a dorm bed.
We compare all hostel prices in Amsterdam for you. So you save money and time!

This section is dedicated to take away all your "I wish someone had told me that before I went!" experiences. This way, you can spend less time settling in, and more time making new friends in your chosen hostel. We share our insider knowledge of tips, tricks and important things to look out for in Amsterdam. 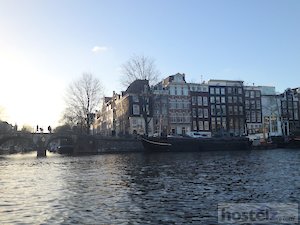 Amsterdam is the capital of the Netherlands. It is the most populous city in the Netherlands with over 750,000 people. The greater Amsterdam area is home to over 1.4 million people (about 10% of the whole population of the Netherlands). The city dates back to the 13th century when the first wooden buildings were built on the site of modern-day Amsterdam. Today, Amsterdam is a vibrant, culturally influential city with many lodging choices.

Amsterdam hostels are probably the most cost-effective of those choices. Amsterdam hostels are close to many things. There are plenty of renowned museums in the city (e.g. the Rijksmuseum which holds works by Rembrandt, the Van Gogh Museum which curates Vincent van Gogh's work, and the well-known Anne Frank house). The city is also home to one of the world's most famous orchestras, the Koninklijk Concertgebouworkest. They play at the corner of Museumplein at the concert house (Concertgebouw).

When you visit an Amsterdam hostel, keep in mind that the city is very well known for the centuries' old tradition of acceptance and open-mindedness. This is a city where prostitution is legal, and the (in)famous Red Light District, there are coffee shops that sell cannabis products, and there is a vibrant nightlife with over 1500 bars and cafes that attract a lot of tourists. Leidseplein is also one of the nightlife centers.

Amsterdam is a city of unique features and architecture. Amsterdam hostels are also very diverse. Be prepared to spend a fair amount of money here because the city itself, along with most of the Netherlands, is a bit expensive.

We've collected the most common questions for hostels in Amsterdam. The more you know, the better you can plan with confidence and ease, right?

This makes Hostelz.com the best place to find cheap accommodation in Amsterdam.

Above we list every single hostel there is in the city. Let us take a broader look at what you can expect - and what not. We created this cheatsheet for you to get a more complete picture of the hostel quality in Amsterdam, average prices and types of hostels to choose from.
49 Total number of hostels
$50 Average dorm price
$209 Average private room price
$36 Cheapest hostel in Amsterdam
Loft Hostel is the cheapest
14 Party hostels in Amsterdam
The Bee Hostel is the best rated
Most Amsterdam hostels are located in
Centrum, Red Light District, Amsterdam-West
7.5 Average rating of all hostels

Travel Tips for Amsterdam - from the Community

Travel Tips for Amsterdam - from the Community

Hey fam! Here are a few more tips from the community, from them to you, and you to them. This space is dedicated for travellers to share their best tips on backpacking Amsterdam. Have a closer look - the Hostelz community share real hidden gems, insider knowledge and overall impressions of Amsterdam. Everyone is welcome to add something useful, funny, unexpected and the "absolutely necessary to know before you go" - share, share and then share a little more!