2 hostels available. Prices start from $34 for a dorm bed.
We compare all hostel prices in Haarlem for you. So you save money and time!

This section is dedicated to take away all your "I wish someone had told me that before I went!" experiences. This way, you can spend less time settling in, and more time making new friends in your chosen hostel. We share our insider knowledge of tips, tricks and important things to look out for in Haarlem. 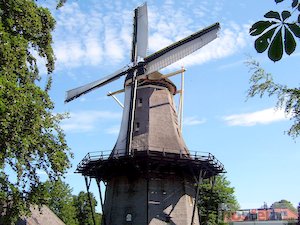 Haarlem is a lovely and nice city in the Netherlands that can be visited as a day trip from Amsterdam, considering it is only few kilometers away from it and very well connected by the train system. It is still nice though to spend some time (at least two or three days) in this quaint city on the River Spaarne to take everything in and don't rush it through.

There are various options in Haarlem when it comes to accommodation, some are more budget friendly; in fact there are a couple of hostels in Haarlem, which offer a comfortable stay without spending too much money. There are other accommodation solutions like hotels or even apartments for hire, but the hostels are by far the more budget friendly. Staying in a Haarlem hostel will also allow you to do some laundry if needed, there will be free Wi-Fi, the possibility to order a meal or a drink, and also to park your bicycle. The hostels in Haarlem offer both dorms and private rooms for whoever is more concerned about their own privacy.

The historical centre of Haarlem is simply stunning, full of many old buildings with the classic Dutch architecture -- some of which are facing the picturesque canals. There are some museums that can be visited too and also plenty of shops, from well-known brands to the independent and local shops selling crafts and handmade goodies, some of which are of very nice design.

One thing not to be missed in Haarlem is the old windmill De Adriaan, which also has a museum. It's a typical Dutch windmill on the river and not far at all from the centre, so it's easily reached even on foot. The whole city is in fact easy to walk around, but time is tight cycling would probably be the best choice. The best way to visit Haarlem is by bikes that can be hired in various locations in the city.

Not far from Haarlem there is also a lovely beach that can be reached either by train or bike because it's about ten kilometers away. There is a little for everyone and every age in Haarlem.

We've collected the most common questions for hostels in Haarlem. The more you know, the better you can plan with confidence and ease, right?

This makes Hostelz.com the best place to find cheap accommodation in Haarlem.

What are the best party hostels in Haarlem?
HI - Stayokay Haarlem Hostel is the best hostel for partying in Haarlem.

Above we list every single hostel there is in the city. Let us take a broader look at what you can expect - and what not. We created this cheatsheet for you to get a more complete picture of the hostel quality in Haarlem, average prices and types of hostels to choose from.
2 Total number of hostels
$35 Average dorm price
$146 Average private room price
$36 Cheapest hostel in Haarlem
HI - Stayokay Haarlem Hostel is the cheapest
1 Party hostels in Haarlem
HI - Stayokay Haarlem Hostel is the best rated
8.7 Average rating of all hostels

Travel Tips for Haarlem - from the Community

Travel Tips for Haarlem - from the Community

Hey fam! Here are a few more tips from the community, from them to you, and you to them. This space is dedicated for travellers to share their best tips on backpacking Haarlem. Have a closer look - the Hostelz community share real hidden gems, insider knowledge and overall impressions of Haarlem. Everyone is welcome to add something useful, funny, unexpected and the "absolutely necessary to know before you go" - share, share and then share a little more!