Welcome to your detailed guide for hostels in Bern, Switzerland. You can choose from 4 Bern hostels. In total, there are 5 cheap places to stay in Bern such as guesthouses and bnbs. Prices start from $54 for a dorm.

This section is dedicated to take away all your "I wish someone had told me that before I went!" experiences. This way, you are better prepared for what to expect, what not to expect and can spend less time settling in, and more time making new friends in your chosen hostel. We share our insider knowledge of tips, tricks and important things to look out for in Bern. To help you make friends with Bern before you visit, we've included a few helpful and fun things you should know about the area. Enjoy! 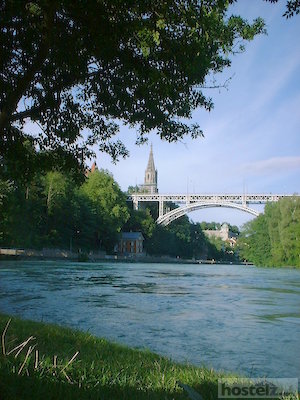 Bern receives very mixed reviews from its visitors; some find it intriguingly charming while others are put off by the overall grayishness of the old town (resulting from the gray stone used as a building material there). Whether the coloring appeals, it doesn't change anything about Bern being a very well-kept, historic town in a pristine location in a deep valley along a winding river. It is the capital of Switzerland, albeit not the biggest city in the country (that would be Zurich) and has more of a small-town flair than a cosmopolitan touch.

It is for the historical lovers and all the outdoor people, as the hinterland is fantastic for hiking, biking, and mountaineering with some of the best mountain climbing routes in spitting distance. In town itself there is decent shopping, good food, and some cultural institutions and events, but not much in terms of nightlife. Add the "capital"-factor to the already-high price level in Switzerland and Bern becomes a rather expensive place. The heraldic animal of Bern is the bear and -- to the dismay of animal rights activists -- they keep some in a ditch close to the river. Please do not climb down to the bears. They look cute from above but when up close they might well be the end of you -- which has sadly happened before to tourists trying to cuddle them!

Getting to and from town is possible by train and some long distance buses. The frequency is not quite as high as in other parts of Switzerland, so checking ahead is well worth it.

Hostels in Bern are few and far between, but those that exist are quite central and of very good standard. With a bit of enthusiasm, the Bern hostel of your choice is reached on foot from the major drop-off points. Otherwise, there is a notable network of city buses helping out. Those buses might become more important when you wish to leave the hostel zone (inner city) as the surrounding terrain is pretty hilly.

There are plenty of frequently asked questions about hostels in Bern. We've collected the most common questions and doubts when it comes to picking your preferred accommodation in Bern. The more you know, the better you can plan with confidence and ease, right?

How to find hostels in Bern?

Hostelz.com shows all 4 Hostels in Bern. Simply filter by neighborhood and price to find your perfect budget place to stay.

Which hostels in Bern are good for families?

Hotel-Pension Marthahaus is the best hostel in Bern for families.

What is the best way to find cheap accommodation in Bern?

Hostelz.com compares prices for 4 hostels in Bern, Switzerland. We list for you other cheap places to stay in Bern such as

This makes this very website the best place to find cheap accommodation in Bern.

What are the best party hostels in Bern?

Hostel 77 Bern is the best rated hostel for partying in Bern.
It offers: Bar.

Travel Tips for Bern - from the Community

Hey fam! Here are a few more tips from the community, from them to you, and you to them. This space is dedicated for travellers to share their best tips on backpacking Bern. Have a closer look - the Hostelz community share real hidden gems, insider knowledge and overall impressions of Bern. Everyone is welcome to add something useful, funny, unexpected and the "absolutely necessary to know before you go" - share, share and then share a little more!

Hi all I lived in Berne Some cool things are: - Aare river (go for a swim, keep safety in mind! Only go where the locals are swimming) - Zoo "Dalholzli" - The Bear park - Gothic Church - Hill "Gurten" (nice view) - platform "grosse schanze" - platform "kleine schanze" - old town - all the bridges - plateau "rosengarten" - "bernaqua" spa & wellness - walking by the river aare - river rafting from thun to berne - rent a bike (for free!) and explore the city

I embarked on my first transatlantic flight just to see the Einstein Exhibit featured at the History Museum here, and it was worth every mile. I meant to stay only two days, but was there nearly one week to unwind in the quiet Swiss town on the river. I'd like to visit in the summer sometime, when you can swim or raft. In the summer you can also borrow a bicycle to travel about for free.

Bern is a beautiful classy city. It's a great place to walk around and spend some time by the river. As you would expect in Switzerland, it's very clean and stately. Their are great views of the city, the river, and the residents' small gardens from the small park with an overlook next to the gothic chuch. Bern also has its own medieval part of the city that winds down to the river and is quite charming. While Bern won't take up too much of your time, it's a great city for an overnight stop and some meandering.

Bern is fun to walk around in, there are lots of cute fountains, but the Bear Pits are slightly depressing. I liked the art museum, but after one day I thought that I had seen most of the city.

Hostel? Check! Now let's have at your hostel packing list for Bern and Switzerland.