20 hostels available. Prices start from $18 for a dorm bed.
We compare all hostel prices in Granada for you. So you save money and time!

This section is dedicated to take away all your "I wish someone had told me that before I went!" experiences. This way, you can spend less time settling in, and more time making new friends in your chosen hostel. We share our insider knowledge of tips, tricks and important things to look out for in Granada. 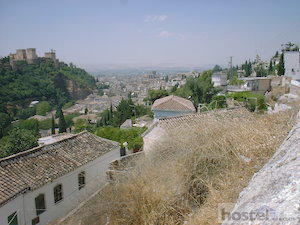 Granada is known mainly for the massive Alhambra and the Moorish architectural influences throughout the city. The city has an excellent public transit system relying primarily on buses. Although the city can get quite hot during the summer months, the city attempts to alleviate the heat with hanging canvas over most pedestrian walkways to create plenty of shade.

If you are visiting for the Alhambra, it is required to book in advance. You can book the day before in most cases, although you may have to visit fairly early in the morning or in the middle of the day with the scorching heat as the 9am-1pm time slots sell out quickly. Make sure that you allow yourself plenty of time to actually get up to the Alhambra, as it is located on top of a very large hill and can be difficult to find the correct route up through the winding streets.

When looking for a Granada hostel, pay specific attention to the availability of air conditioning. You will see many other bleary eyed travelers who were put too many into a room with no cooling and as such suffered without sleep.

In general the best place for travelers is within the winding roads of the area due west of the Alhambra. The majority of hostels in Granada are located in this area, and although it may be hard to find initially you will find the atmosphere hard not to love. There is never an overwhelming number of tourists in the city and as such you will find hostels do not book full very often.

We've collected the most common questions for hostels in Granada. The more you know, the better you can plan with confidence and ease, right?

This makes Hostelz.com the best place to find cheap accommodation in Granada.

What are the best party hostels in Granada?
ECO Hostel is the best hostel for partying in Granada.

Above we list every single hostel there is in the city. Let us take a broader look at what you can expect - and what not. We created this cheatsheet for you to get a more complete picture of the hostel quality in Granada, average prices and types of hostels to choose from.
20 Total number of hostels
$29 Average dorm price
$94 Average private room price
$17 Cheapest hostel in Granada
Fundalucia is the cheapest
8 Party hostels in Granada
ECO Hostel is the best rated
Most Granada hostels are located in
Quentar
7.4 Average rating of all hostels

Travel Tips for Granada - from the Community

Travel Tips for Granada - from the Community

Hey fam! Here are a few more tips from the community, from them to you, and you to them. This space is dedicated for travellers to share their best tips on backpacking Granada. Have a closer look - the Hostelz community share real hidden gems, insider knowledge and overall impressions of Granada. Everyone is welcome to add something useful, funny, unexpected and the "absolutely necessary to know before you go" - share, share and then share a little more!