This section is dedicated to take away all your "I wish someone had told me that before I went!" experiences. This way, you are better prepared for what to expect, what not to expect and can spend less time settling in, and more time making new friends in your chosen hostel. We share our insider knowledge of tips, tricks and important things to look out for in Port Shepstone. To help you make friends with Port Shepstone before you visit, we've included a few helpful and fun things you should know about the area. Enjoy! 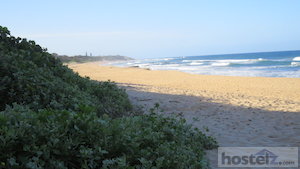 Port Shepstone, South Africa, is one of the major transport hubs on the country's South Coast in KwaZulu Natal, and is around one hundred twenty kilometers southeast of Durban. Travelers heading to Lesotho via the Qacha's Nek border, and for the smaller beaches further southeast, will have to change transport here. There is also access to the Oribi Gorge, one of South Africa's big attractions, from Port Shepstone.

The town itself is nothing to write home about, though it sits on the banks of the South Coast's largest river, the Mzimkhulu. For those with their own transport, Oribi Gorge is just thirty kilometers west.

There are no backpackers’ hostels in Port Shepstone, South Africa, itself, but there are a number on the south coast between Durban and Port Shepstone. The closest to the town is in the Shepstone suburb of Umtentweni, just eight kilometers from the town center and an easy ride to town by public transport and to Durban.

Umtentweni boasts a long, sweeping beach with crashing waves ideal for surfing. There are local surf competitions during the year and it's also possible to spot whales and dolphins from Umtentweni, particularly during the Sardine Run, the annual migration of the sardines from around May to June, on which the cetaceans come close to shore to feed. A Whale Deck has been built in Umtentweni, high up on the hillside for the best views.

All the Port Shepstone, South Africa hostels along the south coast cater largely to the surfing fraternity, but can organize trips in the region for those backpackers without their own transport who have different interests. There are a whole host of nature reserves on the south coast -- Vernon Crookes, Empisini, and Mbumbazi, to name but three -- which incorporate estuaries, lowland forest, Afromontane forest, and coastal grassland (which is great for bird watchers).

The hostels in Port Shepstone, South Africa area are great, intimate, social little places that are ideal for meeting other travelers. All of them sit right close to the beach and are easily accessible from either Port Shepstone or Durban by public minibus taxi. In Durban, the minibus taxi station for this stretch of coast is found at Brook Street Market, behind Berea train station with taxis leaving every thirty minutes throughout the day.

How to find hostels in Port Shepstone?

There is exactly 1 Hostel in Port Shepstone, South Africa. Hostelz.com compares the prices for this hostel so you can get the best price on any major booking site.

What is the best way to find cheap accommodation in Port Shepstone?

This makes this very website the best place to find cheap accommodation in Port Shepstone.

Travel Tips for Port Shepstone - from the Community

Hostel? Check! Now let's have at your hostel packing list for Port Shepstone and South Africa.