Get to know Cape St. Francis (no more "I wish I knew this before")

This section is dedicated to take away all your "I wish someone had told me that before I went!" experiences. This way, you are better prepared for what to expect, what not to expect and can spend less time settling in, and more time making new friends in your chosen hostel. We share our insider knowledge of tips, tricks and important things to look out for in Cape St. Francis. To help you make friends with Cape St. Francis before you visit, we've included a few helpful and fun things you should know about the area. Enjoy! 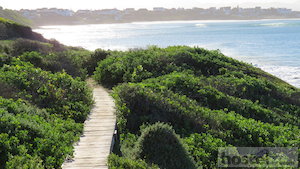 Cape St. Francis, South Africa, is a small village on the tip of a headland in Eastern Cape. It is about thirty kilometers south of the N2 highway, passing through Humansdorp, the main transport hub for this area. Cape St. Francis is home to no less than five nature reserves and is very popular with experienced surfers due to the year-round swells.

The area around Cape St. Francis and this stretch of coast is known for its wide variety of flora, particularly the Fynbos, which grows on the dunes. There are around nine thousand different species of plant here, seventy percent of which are endemic.

This is a region that rewards those who get out and walk the trails; there are around a dozen that can be interlinked to make longer overnight hikes. The most popular walks around Cape St. Francis include the nine-kilometer Shark Point Walk that passes the lighthouse and the Genesis yacht wreck, the six-kilometer Blowhole Hike through the Irma Booysen Flora Reserve, and the Bay To Bay hike of more than seven kilometers from Cape St. Francis to St. Francis Bay along the shoreline and through lush Fynbos.

Cape St. Francis Nature Reserve has a number of shorter trails via Seal and Shark Points. While on any of these walking trails, keep a lookout for bottlenose and common dolphins, great white and mako sharks and humpback and southern right whales, particularly during the June-to-July sardine run and the later August-to-November migration. Where the walking trail takes the beach route, look out for shells -- there is a wide variety that gets washed up here. This area is also home to the endangered African black oystercatcher.

How to find hostels in Cape St. Francis?

There is exactly 1 Hostel in Cape St. Francis, South Africa. Hostelz.com compares the prices for this hostel so you can get the best price on any major booking site.

What is the best way to find cheap accommodation in Cape St. Francis?

This makes this very website the best place to find cheap accommodation in Cape St. Francis.

Travel Tips for Cape St. Francis - from the Community