50 hostels available. Prices start from $7 for a dorm bed.
We compare all hostel prices in Lima for you. So you save money and time!

This section is dedicated to take away all your "I wish someone had told me that before I went!" experiences. This way, you can spend less time settling in, and more time making new friends in your chosen hostel. We share our insider knowledge of tips, tricks and important things to look out for in Lima. 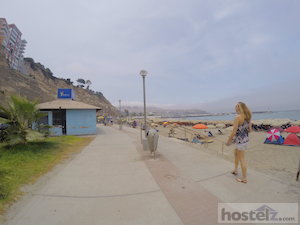 Lima, Peru, is the capital of the country and home to more than nine million people (twelve million, if you take into account the metropolitan area). Almost one-third of the Peruvian population lives in and around the capital.

The city was founded in the sixteenth century by the Spanish conquistador Francisco Piazzaro, who led the expedition to defeat the Inca Empire and claimed the conquered land for Spain. Many indigenous inhabitants died due to exploitation and epidemic diseases introduced by the Spanish invaders. In the early nineteenth century, the country declared its independence from the Kingdom of Spain, and subsequently Lima became the capital of the Republic of Peru. The centre of Lima is situated around fifteen kilometres inland at the shore of the Rimac River.

Be prepared to see poor neighbourhoods and poverty while getting around in the city. Many people moved to the metropolitan area from the Andes Mountains to find a good job; unfortunately for many new arrivals, their dreams of a better life have never come true. In general, the best solution to stay safe in Lima is to simply maintain a low profile and leave your valuables at home.

The city is surrounded by a very arid desert. In the summer, the weather is usually sunny and very warm. Maximum temperatures range from 30 to 33 degrees Celsius. In winter, the temperatures reach up to 22 degrees Celsius (so it is not a real winter). However, during that period, it is often overcast and rainy for days at a time.

The capital of Peru offers plenty of options for every sort of tourist. If you want to stay in five-star hotels or inexpensive hostels in Lima, you will be covered for all possibilities.

A lot of Lima hostels are located in the neighbourhoods of Surquillo, Leuro, and Cocharcas.

Generally, the price level for hostels in Lima is low, so you do not have to spend too much money on accommodation.

One of the highlights of Lima is the historic centre. It is among the most important tourist destinations in Peru. Very interesting are the so-called balconies of Lima - they are part of the cultural heritage and they were built during the Spanish Colonial period as well as the Republic of Peru.

In and around the historic centre, you can find more than one thousand six hundred balconies of that kind.

Parque del Amor is romantic park in Miraflores. It is the perfect place for a selfie or for a walk with your partner.

Art lovers have to check out the Museo de Arte de Lima. The museum was recently renovated and it houses pieces of art from the pre-Columbian to contemporary art.

Lima also has several beaches among the most popular strip in the country, where you can find a variety of recreational and sports activities. This rocky beach offers meters and meters of beauty to be observed from viewpoints and parks in the Miraflores and Barranco districts, among others, as well as a quiet afternoon or good surfing.

What to eat in Lima

Peruvian gastronomy in Lima gathers its wealth from all the provinces and shows itself in its maximum splendor combining its typical and Creole cuisine with Chinese and Japanese influences as a result of migrations from said countries to Peru.

The most representative dish is the chaufa, Peruvian-style Chinese rice, among many other dishes of the chifa or the cuisine that presents the fusion between these two cultures.

The coast, its environment and the flavors of its cuisine are an essential part of the Peruvian identity and its gastronomic, natural and cultural heritage. The warmth of your experience and the friendliness of its people, one more reason to celebrate it.

We've collected the most common questions for hostels in Lima. The more you know, the better you can plan with confidence and ease, right?

This makes Hostelz.com the best place to find cheap accommodation in Lima.

What are the best party hostels in Lima?
Alpes Lima Kennedy Park is the best hostel for partying in Lima.

Above we list every single hostel there is in the city. Let us take a broader look at what you can expect - and what not. We created this cheatsheet for you to get a more complete picture of the hostel quality in Lima, average prices and types of hostels to choose from.
50 Total number of hostels
$12 Average dorm price
$38 Average private room price
$7 Cheapest hostel in Lima
Tupac Hostel - Lima Airport is the cheapest
30 Party hostels in Lima
Alpes Lima Kennedy Park is the best rated
Most Lima hostels are located in
Miraflores, Barranco, San Isidro
7.2 Average rating of all hostels

Travel Tips for Lima - from the Community

Travel Tips for Lima - from the Community

Hey fam! Here are a few more tips from the community, from them to you, and you to them. This space is dedicated for travellers to share their best tips on backpacking Lima. Have a closer look - the Hostelz community share real hidden gems, insider knowledge and overall impressions of Lima. Everyone is welcome to add something useful, funny, unexpected and the "absolutely necessary to know before you go" - share, share and then share a little more!