8.7
2,944 Reviews
Good Location
We compare all hostel prices in Lima for you. So you save money and time!

1900 Backpackers Hostel is listed at the following booking sites:

How is 1900 Backpackers Hostel rated on booking websites?

1900 Backpackers Hostel is a great hostel with a lot to offer. It's pretty far from Miraflores and Barranco, but close to the historical area of the city, as well as the central metro station.

It's located about ten kilometers from Barranco and still a fair way from Miraflores. This hostel is more ideally located for those who don't want to lug their bags too far from the bus stations, or those looking to stay out of the main tourist areas. Everything you need is still close by, and so is the metro station, which makes it easy to visit the other suburbs. The hostel is located opposite Parque de la Exposicion on Avenida Garcilazo de la Vega.

Rooms here are clean, spacious, have plenty of power points, and smell faintly like incense. There are very large lockers in every room to hold your packs. Beds are comfy, and have thick pillows and blankets. They are can be a bit squeaky, though. The dorm we reviewed has locked doors to small old balcony at the end of the room. A glass panel has been removed for airflow. Some might wish they could close this at night, as it opens onto the road below -- although with the climate in Lima, you might be glad that nobody can.

Bathrooms are large with a few shower stalls and a few cubicles per bathroom. Shower stalls all have stools, which can be put out front of the stalls to hold clothes or toiletries. There's also soap holders in the shower to make things easier. The hot water is piping hot and there's great pressure, so you won't want to get out. Unfortunately for girls, there's no power point in their bathroom, though the rooms have plenty.

This hostel has a lot to offer with its common areas. Firstly, there's a bunch of small lockers in the hallway for valuables, for those that want them in a monitored or accessible area. There are also lockable charging boxes with a few power points in each, where you can leave your electronics for the day, or while you shower.

The hostel has a travel agent inside, as well as an ATM. There are two computers for public use, as well as Wi-Fi. Unfortunately, the Wi-Fi only works in the common areas, and not in the rooms. Breakfast here is included and goes for three hours, but is very basic. There's no laundry here, but there's one only two blocks away.

This hostel has a common kitchen, but it's very small, poorly equipped, and under-stocked. But it's still a kitchen, so you should be able to make just about anything with a bit of imagination. The main common areas are the entrance room with reception, book exchange, computers, travel agent, a few couches, and a table or two. This is almost always a web-surfing area.

The bar/breakfast room has seating, as well as a pool table and foosball table. There's also a couple of small balconies. Most of the time during the day this area gets used as an internet area too, but the hostel puts on daily and nightly activities (cooking classes, live music) and does a good job promoting them, which makes things more social in there.

Overall this hostel might not be as social as the party hostels in Miraflores, but it's still very easy to meet travelers and make new friends because of the efforts of the staff. The bar is actually a bar and not just a beer fridge, and while the prices are standard restaurant prices, there's a couple of two-for-one happy hours per day, which go down well.

For those who don't need to stay in the main, pretty touristy areas of Lima, who want to be close to the bus stations, or are traveling on a budget, this hostel is a great find, and definitely recommended. Other than the Wi-Fi situation, it's got just about everything that a good hostel should have, and more. 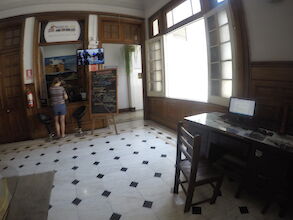 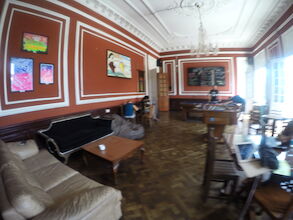 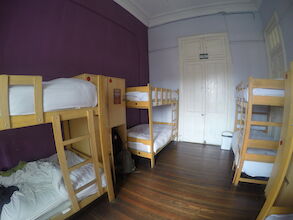 Here is a video of 1900 Backpackers Hostel. The video gives you a better understanding of what you can expect.

1900 Backpackers Hostel is listed on the following booking sites:

www.1900hostel.com
Phone Number: 51.1.4243358
To add or correct information for this listing, please use the Listing Correction Form.

See all 54 hostels in Lima

See all 54 hostels in Lima