All Hostels in Panama City

Compare prices for hostels in Panama City with one click. Add your travel dates and see all prices on all hostel booking sites like Hostelworld, Hostelsclub and Booking.com. 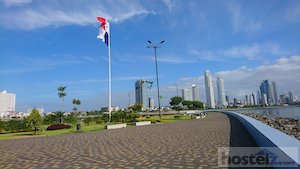 There is a few things you should know about Panama City hostels and the city in general. Besides comparing you the best and cheapest hostels in Panama City, we also highlight what we have liked, disliked and things to look out for.

Panama City is in Panama, Central America, and is the largest city in the province. It has a large population and is a hub for the country’s politics, making it a busy and bustling capital. This urban destination was once where expeditions to conquer the Inca Empire in Peru began, and plays an important part in the continents history, even now and especially when it comes to trade.

When you first arrive in Panama City, it may overwhelm you with its vibrant, colourful neighbourhoods and glittering skyline. The metropolis is divided into many different smaller boroughs, and it is these boroughs that make Panama City such a diverse and colourful place. There are a mix of architectural styles across the city which can be found in many of its buildings, such as its national theatre, and the Metropolitan Cathedral.

The hostels available in Panama City display this kind of diversity - there is accommodation to suit everyone across every borough. A hostel in this city is possibly one of the cheapest you will find, and most will showcase stunning city views. Most hostels in Panama City are close to tourist areas, with a selection of bars and and nightclubs to make your stay more interesting.

If you are planning on staying in one of Panama City’s many hostels, remember that it has a tropical climate, and the best time to go for a dry season is from January through into April. The thought of a hot stay in such a chaotic urban area may put you off, but calm and content is closer than you think - Panama City isn’t far from the Pacific or Caribbean ocean, meaning you can sink your feet into the sand, or even explore the country’s rain forests on a day trip.

Whichever version of Panama you like, there is sure to be a lot of excitement in its capital city.

Things to do in Panama City

Here is a few more tips from the community. Other travelers share their best tips on backpacking Panama City:

I love Panama. They have nice chicks. I've visited all countries of Central America twice and just might do a third trip at the end of this year.