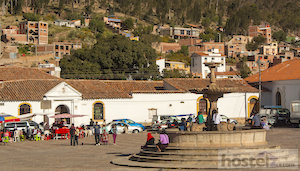 Sucre is one of the most visually stunning cities in the whole of the continent -- it is the official capital of Bolivia and was declared a UNESCO world heritage site two decades ago. The city was founded nearly five hundred years ago by the Spanish and the city has played an important role in Bolivian history throughout the centuries. Independence was declared here in 1852 after being liberated by the armies commanded by South American icon, Simon Bolivar.

The city is very popular with backpackers and there are a number of Sucre hostels scattered in the streets surrounding the main square, Plaza 25 de Mayo. Many of these offer dorms and the prices are cheap compared to other south American capitals. Many of the hostels act as signposts to local language schools or run them themselves as Sucre is an important centre if you want to study Spanish. Prices are cheap, even for South America, and the availability of quality teachers is enhanced by Sucre being home to two important Bolivian universities.

It is a pleasant place to spend a few days at a Sucre hostel and visit some great indigenous markets (try the Mercado Campesino for llama wool, coca leaves, and everything in between). Sucre is a youthful city with all the facilities you would expect, from launderettes, travel agencies, internet facilities, and plenty of traveler-oriented restaurants for those sick of the ubiquitous milanese de pollo! The town is safe to walk around in and the climate is hot during the day and sunny but can be chilly at night. Check for extra blankets in your hostel; hot showers are needed here.