21 hostels available. Prices start from $19 for a :roomType.
We compare all hostel prices in Stockholm for you. So you save money and time!

This section is dedicated to take away all your "I wish someone had told me that before I went!" experiences. This way, you are better prepared for what to expect, what not to expect and can spend less time settling in, and more time making new friends in your chosen hostel. We share our insider knowledge of tips, tricks and important things to look out for in Stockholm. To help you make friends with Stockholm before you visit, we've included a few helpful and fun things you should know about the area. Enjoy! 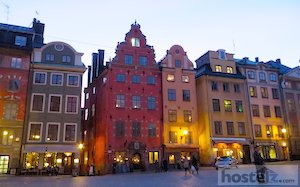 Stockholm is the capital of Sweden and also the most populous city in the country. It is a charming combination of old and new architecture, and the feeling of and old European city combined with a vibe of a modern city.

The Stockholm hostel options are numerous. But the hostels are a bit spread out, rather than clustered in one part of the city. Hostel beds aren't cheap in Stockholm, but the prices are reasonable for a large Swedish city.

Stockholm is easily accessible by buses, trains, planes, and also ferries. In the city there is a comprehensive and rather well-built public transport system, which includes subways, commuter trains, buses, ferries, and a light rail system. It is reasonably priced and, along with biking, the best way to move around the city. Even walking around the city is not such a bad idea, because the city center is pretty compact. The cabs in Stockholm, however, are a bit overpriced.

There is plenty to do and see in Stockholm. Maybe the biggest and most worthwhile place to visit is the famous Old Town (Gamla Stan), which is a beautiful historic part of the city. You can easily spend half of a day in here, just wandering around the cobblestone streets and appreciating the old architecture and charm of the district.

The archipelago around Stockholm is also worth seeing. Considered one of the most beautiful ones in the world (in the summer, that is), the archipelago has over 24,000 islands on it. Check the ferry line options for details. The Royal Palace (built between 1697 and 1754) is also an attractive tourist destination. In addition, there are plenty of museums and art galleries for those interested.

Stockholm hostels are varied and unique, and you should have no problem finding a great place to stay in the city.

There are plenty of frequently asked questions about hostels in Stockholm. We've collected the most common questions and doubts when it comes to picking your preferred accommodation in Stockholm. The more you know, the better you can plan with confidence and ease, right?

This makes this very website the best place to find cheap accommodation in Stockholm.

Above we list every single hostel there is in the city. Let us take a broader look at what you can expect - and what not. We created this cheatsheet for you to get a more complete picture of the hostel quality in Stockholm, average prices and types of hostels to choose from.
21 Total number of hostels
$32 Average dorm price
$108 Average private room price
$19 Cheapest hostel in Stockholm
Hostel by Bromma is the cheapest
2 Party hostels in Stockholm
Generator Stockholm is the best rated
Most Stockholm hostels are located in
Gamla Stan, Norrmalm, Södermalm
6 Average rating of all hostels

Travel Tips for Stockholm - from the Community

Travel Tips for Stockholm - from the Community

Hey fam! Here are a few more tips from the community, from them to you, and you to them. This space is dedicated for travellers to share their best tips on backpacking Stockholm. Have a closer look - the Hostelz community share real hidden gems, insider knowledge and overall impressions of Stockholm. Everyone is welcome to add something useful, funny, unexpected and the "absolutely necessary to know before you go" - share, share and then share a little more!