All Hostels in Porto

Compare prices for hostels in Porto with one click. Add your travel dates and see all prices on all hostel booking sites like Hostelworld, Hostelsclub and Booking.com. 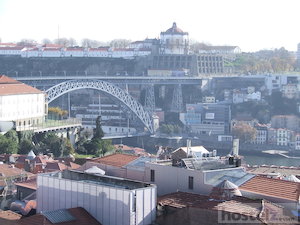 There is a few things you should know about Porto hostels and the city in general. Besides comparing you the best and cheapest hostels in Porto, we also highlight what we have liked, disliked and things to look out for.

Porto is Portugal's second largest city and the home of the world famous Port wine. The city lies on the bank of the Duoro River and dates back to the Roman Empire. The city's Ribeira district, an ancient neighborhood uphill from the Duoro, is a registered UNESCO World Heritage Site full of historic townhouses and winding alleyways.

The Vila Nova de Gaia area is a suburb of the city on the other side of the Duoro. The suburb is famous for it's port wine and several companies offer free or cheap tours and tastings.

There are many affordable hostels in Porto, most situated in the neighborhoods above the Ribeira. Most Porto hostels are inexpensive and many offer free breakfast. The city's attractions are scattered around the area but are easily accessible by bus. Be sure to check out the city's famous tiled churches, the Sao Bento tiled railway station, the Liveria Lello (a bookstore whose staircase inspired a set piece from Harry Potter), and the many markets and bakeries. Also check out the Dom Luis I bridge at night. The beautiful iron bridge connects Porto to Vila Nova de Gaia and pedestrians can walk across the river to explore the neighboring suburb.

While in Porto don't forget to try their most popular snack, the francesinha. The famous junk food is a sandwich filled with several meats, covered in melted cheese, and topped with a special sauce made of beer and "secret" ingredients. If exploring the food is important to you, also try the pastel de nata, the traditional Portuguese egg tart.

If you only have a day in Porto, spend it at the Ribeira. The city is bustling with charm in the Ribeira district at night. The restaurants line the river and offer outdoor seating alongside troubadours and artists. Even when it's chilly out you can enjoy the outdoor seating at restaurants offering blankets and fireside seating.

Things to do in Porto

Here is a few more tips from the community. Other travelers share their best tips on backpacking Porto:

Very nice hostel, quite new. Beautifully situated, near the beach with the great view over the ocean. Good for hanging out and meeting people.