All Hostels in Warsaw

Compare prices for hostels in Warsaw with one click. Add your travel dates and see all prices on all hostel booking sites like Hostelworld, Hostelsclub and Booking.com. 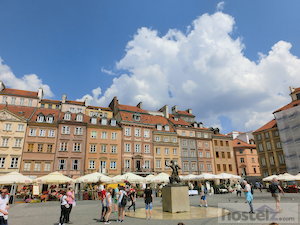 There is a few things you should know about Warsaw hostels and the city in general. Besides comparing you the best and cheapest hostels in Warsaw, we also highlight what we have liked, disliked and things to look out for.

Poland’s modern capital of Warsaw is an amazing example of the extent of post-war rebuilding in Europe, and is a city that has embraced all aspects of its past as well as its future. Whether you are interested in seventeenth-century architecture or the horrors of the Second World War, Warsaw is sure to have something for everybody.

There is a wide range of Warsaw hostel choices, although by far and away the most desirable area to stay in is Stare Miasto (Old Town) or Nowy Swiat (New World, a trendy shopping street full of restaurants and cafes). Both areas are fairly lively but retain a degree of picturesqueness, something that is lacking in other, more modern, quarters of the city. Destroyed by the Germans in World War II, Warsaw was carefully rebuilt -- the square in the Old Town is a painstaking replica of the original, and the work on the nearby Royal Palace was only finished recently.

Regardless of where your Warsaw hostel is located, an excellent metro, bus, and tram system connects all the major neighbourhoods of Warsaw, and there are good connections to both Warszawa Centralna railway station and Chopin airport. Tickets for the bus and tram are not sold on board, and must be bought either from machines at transport stops or at nearby kiosks before you travel. Passes that are good for all modes of transportation are available from multilingual machines in metro stations. If you do buy tickets, don’t forget to validate them once on board the bus or tram!

Although there are a number of restaurants on Nowy Swiat and in the Stare Miasto, these can be understandably a little pricy. If staying in these areas, try to find places that sell "zapiekanka" (so-called Soviet pizzas) or one of the rapidly disappearing "bar mleczny" ("milk bars," spartan and sometimes intimidating Soviet-style cafeterias).

Things to do in Warsaw

Here is a few more tips from the community. Other travelers share their best tips on backpacking Warsaw:

Despite having a more modern feel than other Polish cities, Warsaw has a lot of great parks, bicycling trails, museums, historical sites, and excellent shopping, as well as excellent food and the best bulochki in Eastern Europe (at the central train station)! There are a lot of good hostels available for a good price, and the locals are very friendly and welcoming. The transport system is great and there is a lot to do both in the city and in the surrounding area. We stayed for over a week, and surprisingly didn't run out of things to see and do in Warsaw.

This is not so nice as other Polish cities but Warsaw's full of life and it has a hyperactive cultural scene. I love its bars and clubs, all of them unique and brimming with personality. The city also has an excellent public transportation network. Go and enjoy Warsaw's nightlife and don't forget to eat lunch in one of its "bar mleczny" (milk bars)!

Warsaw is Poland's capital... an amazingly friendly blend of Soviet and European with easily the best food anywhere on the continent (Italy can keep its pasta and pesto etc, it doesn't compare to a good portion of periogi). Getting around is easy as well. If you're a student or have an ISIC card the metro, trams and buses cost about 8p (UK)!

An interesting city, more than in any other place I've been to are eastern and western European influences exactly in balance here. Particularly peculiar are the one truly tall skyscraper of the city (a greyish brown monster that was donated to the country by Soviet dictator Stalin out of gratitude for Poland's resistance against his Austro-German colleague Hitler), and the "Old City" of Warsaw, which actually isn't old at all. It was built after WW II, when the centre of the city had been destroyed almost entirely, and it was decided that constructing an exact copy of the city centre as it was before the war, rather than getting creative and designing something new, was the most honourable thing to do. The result is an "Old City" with a highly surreal atmosphere. It's fake, but then again, it's not. The reconstruction was VERY well done, but when you look carefully, you miss the wear & tear, the colouring of moss and other tiny growths that you will invariably find on buildings that have truly lasted longer than a human lifetime.