I just came here because of the anime Dracula !!
Anime boiii

If you only go to one place in your life, let it be Budapest!
Elizabeth

It is a cool city! I enjoyed my stay there! It has everything -- impressive buildings, nice streets, warm people, culture, party, and everything is really cheap! The city is divided in two parts by the river Danube -- Buda, cosy and beautiful, like a small village inside a big city, with narrow streets and relaxing atmosphere; and Pest, where the historical buildings and monuments are. So you have two cities in one! And if you like to party, then you're in the right place! There are lots of pubs and discos everywhere and all of them are super cool and original. I would go to Budapest every weekend to party!
Sira

People overcharge you as much as they can. Make sure you ask for the price even before you cask for a can of Coke. Other than that -- it's a brilliant city, good food, nice accommodation. A very decent place to visit indeed.
Tina

This city sure has character. After Prague and Vienna, we found it definitely dirtier and with a lot of paupers loafing about.The Buda part is beautiful, but the Pest part is harder to like. Choose a decent place to stay. One of the rooms in our apartment had such a horrible stench, it was unusable.
Wim

Budapest is awsome! The peoples are nice and friendly, the city is beautiful.
Helga

I had so much fun there! Watch out at the train station for gypsies. They do get feisty.
Anonymous

Look out for the antique stores -- I am not an antique lover at all, but these little shops are filled with all kinds of old Soviet propaganda and merchandise from pre-1989. Sure, it's all totally overpriced, but looking is free!
Anonymous

Don't waste your money on public transport -- everything is within walking distance, and the walks are really lovely. The maps make the city look big, but I think that's just a complex the Hungarians have. Also, be careful when eating Hungarian cuisine -- these people are serious eaters and the portions are huge! Share your meals! I hope you like cream and are not a vegetarian.
Anonymous

Budapest is a lot different from capitals like Vienna and Prague. At first I felt a little let down as the architecture seemed uncared for and the feel of the place seemed cold and unwelcoming. Then I started to see the real Budapest. Budapest isn't about beautiful buildings and tourist attractions, it's about real living. The markets in Budapest were filled with the most fantastic smells and the locals were willing to show you how and why they make their products. The food was great and the entertainment at night was endless. Don't go to Budapest expecting Paris or Vienna, it's unique in itself and should be judged on what it is, not what it isn't.
Steve

The best thing about Budapest is that you can do just about anything you want there. Big enough that you don't really feel the tourist crush except for up near the Castle and Fisherman's Bastion. There is no reason to miss coming to Budapest.
TG

I spent four days stuck in Budapest. It was quite an experience. I met several people that got stuck there for months. Dangerous place, drug dealers, alcoholics, easy women, hard to leave. I fell in love with a girl there named Ildiko Nagy. I ran out of cash and had to leave her. Just what all you romantic European backpackers are looking for, desperate love and starvation.
Anonymous

In Budapest be prepared to be hit up for money by some people on the street and BEWARE of taxi driver sharks!!! They will rip you off big time and then give you Romanian bills worth next to nil as change. Talk to the locals about what is a fair price before you get a cab because some people in our group paid 3x the normal price to get back to our hotel one night. Other than that, Budapest was an amazing city. The sights and sounds were incredible. Just keep your wits about you and be an informed traveler. Read "Culture Shock! Hungary". That helps a lot too. Have fun!
Jill

Budapest. What an amazing city! I spent 5 days there recently and I absolutely loved it. A little grimey (neglected buildings) in parts, but very beautiful in many places. It's a city wih a lot of character. Very romantic strolls around the Palace and Fishermans Bastion areas. Befriend a local and they can show you a little bit of how much Budapest has to offer. People are friendly and younger generations can speak some English. A very safe city compared to other capitals. Hungarian wines are one of the countries best kept secrets with a huge variety at very good prices. Unicum is a special drink that must be tried at least once to appreciate it. I just wish I could get my tongue around the Hungarian language. But after a few Unicums, language barriers don't mean a thing. Szia!
Paul - London

Try the Unicom and you must go to the thermal baths.
Peter Simpson, Scotland

Budapest is a really big town, and the buildings are not that well kept up (not run down, but dirty exteriors), but there's a lot to do. Definitely go to the Turkish baths (the city baths give partial refunds if you stay less than 3 hours) and also look for the fountain of wine in the labryinths under Buda castle. Wine tours at Eger are not far away either (though Hungarian wine is not the best).
Josh

You should try the Hungarian speciality "Langòs" and the bar "Cactus Juice". I cannot remember where it is, but you can find it on every tourist map. - There are a lot of vegetarian restaurants in Budapest.
Nicole 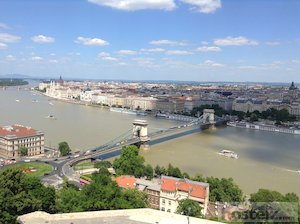 Budapest is the capital of Hungary and home to over 1.7 million Hungarians. It was founded in the 12th century and was ruled by the Greek Empire at the time. Budapest is made up of the Buda and Pest areas which used to be separate cities. Budapest also has an old city section which is a very nice place to visit, especially during summertime.

Hostels in Budapest are a very good value. You will probably end up paying about 10 euros (approximately 12 USD) for a dorm bed, and slightly more for double / twin rooms. Budapest and all of Hungary is a great country for budget travelers, because accommodation and food are very good and inexpensive. Also remember to ask your Budapest hostel staff / owners for tips on what to do around the city and what events are going on during your visit.

There are many, many things to see and do when you stay in a Budapest hostel. It is best to ask your Budapest hostel staff and/or the information centers around the city for a map before heading off.
Hi, I'm Miika, the Hostelz.com local expert for Budapest hostels. Welcome.