All Hostels in Guatemala City

Compare prices for hostels in Guatemala City with one click. Add your travel dates and see all prices on all hostel booking sites like Hostelworld, Hostelsclub and Booking.com. 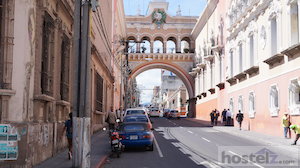 There is a few things you should know about Guatemala City hostels and the city in general. Besides comparing you the best and cheapest hostels in Guatemala City, we also highlight what we have liked, disliked and things to look out for.

The capital and most populated city of Guatemala, Guatemala City is very westernized for a Central American city. You will find many American retail, food, and other stores here, reflecting the large influence that the U.S. has on the Guatemalan economy.

Despite all of this, Guatemala City has a reputation for being unsafe, given the large amounts of money that occupy these parts and the excessive poverty that lives next door. The crime and murder rates here are higher than anywhere else in Guatemala. Many of the locals themselves will tell you that the city is unsafe, and come nightfall, you should not go outside at all. If you do need to go outside, do not under any circumstances walk -- instead, catch a cab.

The hostels in Guatemala are within Zone 10 or Zone 13. The hostel workers should be able to give you tips on how to stay safe and where to go within the area for anything that you might need during your stay in Guatemala City. Most of the sights here are museums, churches, or other historical buildings. There are museums with the history of textiles, Mayan history museums, and ethnology and archaeology museums. The National Palace has some interesting architecture and art work also. The Union Church and La Merced have quite impressive architecture for churches in the area.

They have a really great public transport system -- if you sign on and get a card that you top up, it makes getting around Guatemala City quite cheap.

Things to do in Guatemala City