37 hostels available. Prices start from $4 for a :roomType.
We compare all hostel prices in Quito for you. So you save money and time!

This section is dedicated to take away all your "I wish someone had told me that before I went!" experiences. This way, you are better prepared for what to expect, what not to expect and can spend less time settling in, and more time making new friends in your chosen hostel. We share our insider knowledge of tips, tricks and important things to look out for in Quito. To help you make friends with Quito before you visit, we've included a few helpful and fun things you should know about the area. Enjoy! 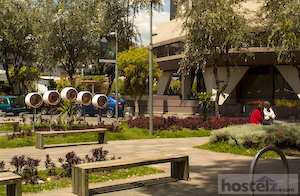 Quito is Ecuador’s capital city high in the Andes Mountains, but it’s also rich in Incan and missionary history. It’s built on the foundation of an ancient Incan city, has plenty of 16th and 17th century buildings, and a thriving Mariscal with bars, cafes, restaurants, and hotels. This is the travellers section, and if you’re keen to meet other backpackers, this is where to seek out a hostel. You can also visit the equator while in Quito. A small village north of the city holds the honour as “La Mitad del Mundo,” or “the middle of the world.” You can get here by bus.

Ecuador straddles the equator, but Quito can be quite cold due to its location at nearly two miles above sea level. It lies near the Pichincha, an active volcano in the Andes mountains. It is also the first (with Krakow, Poland) UNESCO World Heritage Site. This designation means that its one of the least-altered/best-preserved city centres. The first known mentions of the city are in the 16th century, which tells us that the city has been inhabited since the 10th century, but the present location wasn’t settled until the 16th. Quito, like most other South American cities, was at times an Incan city and a Spanish civilisation. There is a lot of missionary history here as well.

Hostel accommodation in Quito is prevalent; it all comes down to what you are doing and where you want to stay. The best area for travellers is the Mariscal, but if you are in town only in transit, you may find staying near the airport or bus station to be better for you. Hostels in Quito cater to everyone. The word sounds the same in Spanish (“hostal”) so you’ll have no problems asking a tourist kiosk for one!

Quito is a great city to explore, with a ton of museums, great nightlife, exciting culture, and more. Do not miss the Basilica del Voto Nacional - once the oldest and largest basilica in the Americas.

There are plenty of frequently asked questions about hostels in Quito. We've collected the most common questions and doubts when it comes to picking your preferred accommodation in Quito. The more you know, the better you can plan with confidence and ease, right?

This makes this very website the best place to find cheap accommodation in Quito.

What are the best party hostels in Quito?
Hump Day Hostel is the best rated hostel for partying in Quito.

Hostel? Check! Now let's have at your hostel packing list for Quito and Ecuador.

Above we list every single hostel there is in the city. Let us take a broader look at what you can expect - and what not. We created this cheatsheet for you to get a more complete picture of the hostel quality in Quito, average prices and types of hostels to choose from.
37 Total number of hostels
$12 Average dorm price
$37 Average private room price
$4 Cheapest hostel in Quito
Escocie - Quito is the cheapest
6 Party hostels in Quito
Hump Day Hostel is the best rated
Most Quito hostels are located in
San Blas, La Tola, La Mariscal
5.6 Average rating of all hostels

Travel Tips for Quito - from the Community

Travel Tips for Quito - from the Community

Hey fam! Here are a few more tips from the community, from them to you, and you to them. This space is dedicated for travellers to share their best tips on backpacking Quito. Have a closer look - the Hostelz community share real hidden gems, insider knowledge and overall impressions of Quito. Everyone is welcome to add something useful, funny, unexpected and the "absolutely necessary to know before you go" - share, share and then share a little more!