32 hostels available. Prices start from $17 for a :roomType.
We compare all hostel prices in Zagreb for you. So you save money and time!

This section is dedicated to take away all your "I wish someone had told me that before I went!" experiences. This way, you are better prepared for what to expect, what not to expect and can spend less time settling in, and more time making new friends in your chosen hostel. We share our insider knowledge of tips, tricks and important things to look out for in Zagreb. To help you make friends with Zagreb before you visit, we've included a few helpful and fun things you should know about the area. Enjoy! 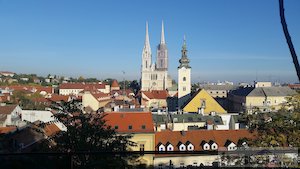 Zagreb is a city with a growing tourist base, and therefore also a growing number of hostels to accomodate them. You probably won't have any luck finding a hostel in Zagreb by asking people on the street, because most residents don't even know they exist. Croatians generally almost never stay in hostels, so the people in Zagreb hostels will most probably be exclusively foreigners. A lot of Zagreb hostels tend to be located in either smaller side streets or not in the immediate center of the city. The hostels in Zagreb with a longer tradition are, however, listed on the major hostel-booking sites.

Although the city gets many young travelers and backpackers, the entrepreneurs in Zagreb have yet to take advantage of this business opportunity. Hence, many Zagreb hostels are run by young Croatians who have traveled abroad as backpackers themselves. Unfortunately, this also means a lack of high-quality hostels as can be found in major Western European cities. They are usually located in converted apartment buildings or private houses, which can add to the charm and personal feel, but can also mean less-than-ideal standards in hygiene. In comparison to other Western European hostels, in general, the hostels in Zagreb are pretty much on the same or slightly lower scale, but they are all very similar to one another.

In terms of activities, Zagreb has yet to discover the full potential of offering things like city bike tours or pub crawls. You might find that the to-do board in your hostel offers suggestions of travel to nearby cities or tourist destinations (taken from the nearest tourist information office), but lacks organized activities for foreigners within the city itself. Most Zagrebians speak at least a little English, and are generally friendly, so asking for directions to tourist sites or for general suggestions about activities is usually met with kindness and interest. Zagreb residents, especially the younger generation, tend to like foreigners and are glad to help out.

There are plenty of frequently asked questions about hostels in Zagreb. We've collected the most common questions and doubts when it comes to picking your preferred accommodation in Zagreb. The more you know, the better you can plan with confidence and ease, right?

This makes this very website the best place to find cheap accommodation in Zagreb.

What are the best party hostels in Zagreb?
Chillout Hostel Zagreb is the best rated hostel for partying in Zagreb.

Hostel? Check! Now let's have at your hostel packing list for Zagreb and Croatia.

Above we list every single hostel there is in the city. Let us take a broader look at what you can expect - and what not. We created this cheatsheet for you to get a more complete picture of the hostel quality in Zagreb, average prices and types of hostels to choose from.
32 Total number of hostels
$26 Average dorm price
$63 Average private room price
$17 Cheapest hostel in Zagreb
Fancy Hostel is the cheapest
3 Party hostels in Zagreb
Chillout Hostel Zagreb is the best rated
Most Zagreb hostels are located in
City Centre, Dubica, Salata
6.6 Average rating of all hostels

Travel Tips for Zagreb - from the Community

Travel Tips for Zagreb - from the Community

Hey fam! Here are a few more tips from the community, from them to you, and you to them. This space is dedicated for travellers to share their best tips on backpacking Zagreb. Have a closer look - the Hostelz community share real hidden gems, insider knowledge and overall impressions of Zagreb. Everyone is welcome to add something useful, funny, unexpected and the "absolutely necessary to know before you go" - share, share and then share a little more!