68 hostels available. Prices start from $6 for a dorm bed.
We compare all hostel prices in Medellin for you. So you save money and time!

This section is dedicated to take away all your "I wish someone had told me that before I went!" experiences. This way, you can spend less time settling in, and more time making new friends in your chosen hostel. We share our insider knowledge of tips, tricks and important things to look out for in Medellin.

Guess what? Medellin is also named and spelled Medellín - It is the same destination. Goodbye confusion. 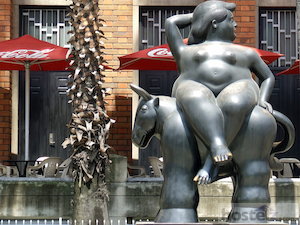 Medellín is Colombia's second-largest city; geographically located in the northwest of the country, it makes for much more than just a journey-breaker.

Medellín has left its bad reputation associated with the drug cartels behind. As home to Pablo Escobar, the country's most famous villain and leader of the Medellín drug cartel, Escobar was previously loved by his contemporaries. The next generation of Medellínos do not hold as much respect and Medellín has returned to a more peaceful place than when it was the battleground of the Cali and Medellín cartels. However, it is interesting to find out more about Escobar -- there are regular tours that bring tourists to his home, his grave, and to the house of his brother, Roberto. There is a cable car that can be taken up to a location where there are awesome views of Medellín's sprawling city.

Colombians are very passionate people and this passion is so evident at football matches. The team Atletico Nacional is the best-known team based in Medellín and there are matches regularly. Tourists regularly attend football games and Colombians embrace their interest in their teams.

When the sun sets, most people get ready for a night in the area Parque Lleras, an area of the city that most know as the Zona Rosa, where the youth come out to party all night long! Plenty of different restaurants, bars, and nightclubs give you places to drink an Aguila beer or for those planning a wild night, some shots of aguardiente.

Every December, Medellín prides itself on its Navidad, or Christmas celebration all over the city -- it is renowned as having the most vibrant display of neon holiday lights. The public transport in Medellín is very good with trains, buses, and cheap taxis. Most tours offer private buses, which collect guests from all the hostels. It is also very well serviced by the country's long distance buses with a modern bus station.

There are many hostels in Medellín, offering every service that backpackers seek. Many are conveniently located near the Zona Rosa area.

There are plenty of frequently asked questions about hostels in Medellin. We've collected the most common questions and doubts when it comes to picking your preferred accommodation in Medellin. The more you know, the better you can plan with confidence and ease, right?

This makes this very website the best place to find cheap accommodation in Medellin.

What are the best party hostels in Medellin?
La Familia Hostal is the best rated hostel for partying in Medellin.

Above we list every single hostel there is in the city. Let us take a broader look at what you can expect - and what not. We created this cheatsheet for you to get a more complete picture of the hostel quality in Medellin, average prices and types of hostels to choose from.
68 Total number of hostels
$13 Average dorm price
$41 Average private room price
$6 Cheapest hostel in Medellin
Joseph el Paisa Hostel is the cheapest
23 Party hostels in Medellin
La Familia Hostal is the best rated
Most Medellin hostels are located in
El Poblado, Patio Bonito, Florida Nueva
6.7 Average rating of all hostels

Travel Tips for Medellin - from the Community

Travel Tips for Medellin - from the Community

Hey fam! Here are a few more tips from the community, from them to you, and you to them. This space is dedicated for travellers to share their best tips on backpacking Medellin. Have a closer look - the Hostelz community share real hidden gems, insider knowledge and overall impressions of Medellin. Everyone is welcome to add something useful, funny, unexpected and the "absolutely necessary to know before you go" - share, share and then share a little more!