148 hostels available. Prices start from $6 for a :roomType.
We compare all hostel prices in Rio de Janeiro for you. So you save money and time!

This section is dedicated to take away all your "I wish someone had told me that before I went!" experiences. This way, you are better prepared for what to expect, what not to expect and can spend less time settling in, and more time making new friends in your chosen hostel. We share our insider knowledge of tips, tricks and important things to look out for in Rio de Janeiro. To help you make friends with Rio de Janeiro before you visit, we've included a few helpful and fun things you should know about the area. Enjoy! 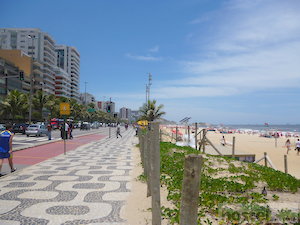 With its 6 million inhabitants, Rio de Janeiro is a contender for one of Latin America’s (and possibly the world’s) most impressive cities. It is like no other. Magnificent beaches, beautiful people, Samba music, lush mountains, and delicious Capirinhas. Not to mention it being host to the world’s largest and most colourful street festival, Carnaval. And there are dozens of Rio de Janeiro hostels.

The middle classes live in the South Zone (Zona Sul) and the working classes in the North Zone (Zona Norte). Tourists are most likely to visit the stunning, sun drenched beaches of Copacabana, Ipanema, the impressive colonial architecture of Centro, the party nightlife of Botofoga and Lapa, or the overlooking hilltop areas of Santa Teresa and Corcovado (Christ the Redeemer).

Buses, metro or taxis are the way to get around – buses are easy to navigate and are plentiful, but are often overcrowded and slow. Most will eventually get to Ipanema. The metro is a faster more efficient alternative from 5am until 12am. Taxis are safer but more expensive, the best choice at night, but sure they are licensed.

Rio has everything. It rivals the world’s top cities for shopping, nightlife, restaurants and of course, the beach. Juice bars line the busy roadsides and choosing which exotic fruits to add to your delicious smoothie is a must. For bars and nightlife, head to the Lapa district, where potent cocktail shacks and food stalls line the streets under and around the white Arcus de Lapa and music pours into the streets. Watch the beautiful people on Copacabana beach play volleyball, or head further along to the trendy, flamboyant gay scene hitting the Ipanema beaches, where you can sip a cold beer or fruit shake from one of the plentiful makeshift beach bars. Watch out for pick pockets especially on these beaches and around the Lapa district.

There are a whole range of hostels in Rio de Janeiro to cover every budget. Although Rio is one of the most expensive areas to stay in Brazil, with the high end tourists heading for Ipanema, there are budget hostels around the Botofoga and Catete areas, which are accessible for many of the tourist attractions, beaches and nightlife. The Rio hostels are lively, fun, and party orientated, often with drinks promotions and cheap tasty food.

The world’s wildest party, Carnaval, happens on the week preceding Ash Wednesday, although the reveling begins months in advance with the hedonistic partying in the streets and live events, free music and concerts. Check out the Samba Schools throughout the year for ongoing parties.

This makes this very website the best place to find cheap accommodation in Rio de Janeiro.

Hostel? Check! Now let's have at your hostel packing list for Rio de Janeiro and Brazil.

Above we list every single hostel there is in the city. Let us take a broader look at what you can expect - and what not. We created this cheatsheet for you to get a more complete picture of the hostel quality in Rio de Janeiro, average prices and types of hostels to choose from.
148 Total number of hostels
$18 Average dorm price
$66 Average private room price
$7 Cheapest hostel in Rio de Janeiro
Hostel Tavares Bastos is the cheapest
87 Party hostels in Rio de Janeiro
021 Hostel is the best rated
Most Rio de Janeiro hostels are located in
Copacabana, Ipanema, Recreio dos Bandeirantes
4.8 Average rating of all hostels

Travel Tips for Rio de Janeiro - from the Community

Travel Tips for Rio de Janeiro - from the Community

Hey fam! Here are a few more tips from the community, from them to you, and you to them. This space is dedicated for travellers to share their best tips on backpacking Rio de Janeiro. Have a closer look - the Hostelz community share real hidden gems, insider knowledge and overall impressions of Rio de Janeiro. Everyone is welcome to add something useful, funny, unexpected and the "absolutely necessary to know before you go" - share, share and then share a little more!