5 hostels available. Prices start from $28 for a dorm bed.
We compare all hostel prices in Las Vegas for you. So you save money and time!

This section is dedicated to take away all your "I wish someone had told me that before I went!" experiences. This way, you are better prepared for what to expect, what not to expect and can spend less time settling in, and more time making new friends in your chosen hostel. We share our insider knowledge of tips, tricks and important things to look out for in Las Vegas. To help you make friends with Las Vegas before you visit, we've included a few helpful and fun things you should know about the area. Enjoy! 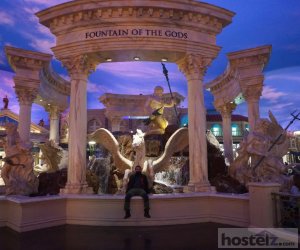 Las Vegas is located in the middle of the Nevada desert. It has a population of over 500,000 people and is most known for gambling, massive casino resorts (often with very distinguishable themes, like Caesars Palace), and live shows.

Las Vegas has a very colorful history. It was founded in 1905 and it remained a relatively small town until gambling was legalized in 1931 and in 1941 the first resort was opened in the soon-to-become Las Vegas Strip. The casino that is considered to be the first one in the Strip is the famous Flamingo, founded by Benjamin "Bugsy" Siegel in 1946.

You will find a select of Las Vegas hostels both off-and on-strip, and the prices are reasonable. Dorm beds are fairly inexpensive and you should expect to pay a bit more for a single/double/twin room.

Las Vegas is served by Interstate 15, which is notoriously crowded during weekends when massive amounts of people start their crawl towards the Sin City. There is also a major airport and some bus and train operators that run regular service to the city.

As mentioned before, that primary thing that people come to do in Vegas is gambling. It will not be a problem to find a place to lose your money into slots (or win big), just take your pick. Most casinos also provide the gamblers with free drinks, just keep your eye open for the waiters while playing the slots.

It might also be worth it to catch a show. There is always something going on in Las Vegas and most of the shows are of very high quality, but may be a bit pricey.

Other than staying in hostels in Las Vegas, you can also save a little cash by eating at the casino buffets. Most major casinos feature large opulent buffets where you can eat all you want for a reasonable price.

There are plenty of frequently asked questions about hostels in Las Vegas. We've collected the most common questions and doubts when it comes to picking your preferred accommodation in Las Vegas. The more you know, the better you can plan with confidence and ease, right?

This makes this very website the best place to find cheap accommodation in Las Vegas.

What are the best party hostels in Las Vegas?
Sin City Hostel is the best rated hostel for partying in Las Vegas.

Hostel? Check! Now let's have at your hostel packing list for Las Vegas and USA.

Above we list every single hostel there is in the city. Let us take a broader look at what you can expect - and what not. We created this cheatsheet for you to get a more complete picture of the hostel quality in Las Vegas, average prices and types of hostels to choose from.
5 Total number of hostels
$34 Average dorm price
$29 Cheapest hostel in Las Vegas
Bposhtels Las Vegas is the cheapest
3 Party hostels in Las Vegas
Sin City Hostel is the best rated
7 Average rating of all hostels

Travel Tips for Las Vegas - from the Community

Travel Tips for Las Vegas - from the Community

Hey fam! Here are a few more tips from the community, from them to you, and you to them. This space is dedicated for travellers to share their best tips on backpacking Las Vegas. Have a closer look - the Hostelz community share real hidden gems, insider knowledge and overall impressions of Las Vegas. Everyone is welcome to add something useful, funny, unexpected and the "absolutely necessary to know before you go" - share, share and then share a little more!