2 hostels available. Prices start from $66 for a :roomType.
We compare all hostel prices in Kauai for you. So you save money and time!

This section is dedicated to take away all your "I wish someone had told me that before I went!" experiences. This way, you are better prepared for what to expect, what not to expect and can spend less time settling in, and more time making new friends in your chosen hostel. We share our insider knowledge of tips, tricks and important things to look out for in Kauai. To help you make friends with Kauai before you visit, we've included a few helpful and fun things you should know about the area. Enjoy!

Guess what? Kauai is also named and spelled Kauaʻi - It is the same destination. Goodbye confusion. 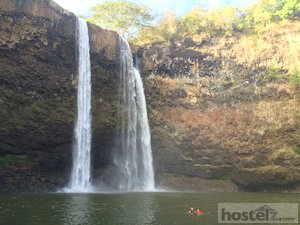 Considered the oldest of all geologically formed Hawaiian Islands, Kauai is known as the fourth-largest island in Hawaii. Formerly named "Atooi" or "Atoui" by the explorer James Cook, it was later called Kaua’i after the standardization of the Hawaiian language. The name Kauai literally translates to "place around the neck," a traditional method of carrying a favorite child in many cultures throughout the world.

Today, Kauai is most notable for its being the home of the Reggae band Kolohe Kai, and for being the least developed, yet most verdant of all the Hawaiian Islands. Kauai is most notable for its seeming lack of advanced modernization in spite of the fact that it is also a prime tourist destination. Known by locals and tourists as the "Garden Island," it lives up to its reputation and is the epitome of a garden paradise.

If you’re looking for bar hopping, clubbing, and many other modern distractions in Kauai, you’ll have a hard time finding the right kind of thrills. But if you’re a nature lover who’s after a great vacation away from the hustle and bustle of the city, Kauai’s rich fields, laden plantations, and its untamed wilderness will definitely appeal to your adventurous soul. Among the best things to do in Kauai is to try and take the Kalalau Trail, a stretch of wilderness cut through with scenic ocean that is found on the Na Pali coastline, or to immerse yourself in the natural beauty of the Waimea Canyon, or the island’s myriad geological formations.

Kauai is also a great beach vacation spot -- the majority of sandy spots here are excellent places to bring children. Kauai is also a great place to unwind and relax, as it boasts places like the Grove Farm Homestead Museum -- a piece of living history that, to this day, plants, harvests, and produces sugar in the traditional way.

If ever you find yourself hankering for a soothing escape into the edge of nowhere, you needn’t even worry that you’ll spend the whole of your vacation camping out, as there is an excellent selection of Kauai hostels, hotels, bed-and-breakfasts, and family-owned inns. Kauai is a relatively small place, so booking for rooms isn’t all that difficult, but its best to always plan ahead prior to arrivals to ensure you get great deals during your stay.

There are plenty of frequently asked questions about hostels in Kauai. We've collected the most common questions and doubts when it comes to picking your preferred accommodation in Kauai. The more you know, the better you can plan with confidence and ease, right?

This makes this very website the best place to find cheap accommodation in Kauai.

Hostel? Check! Now let's have at your hostel packing list for Kauai and USA.

Above we list every single hostel there is in the city. Let us take a broader look at what you can expect - and what not. We created this cheatsheet for you to get a more complete picture of the hostel quality in Kauai, average prices and types of hostels to choose from.
2 Total number of hostels
$66 Average dorm price
$177 Average private room price
$66 Cheapest hostel in Kauai
Kauai Beach House Hostel is the cheapest
Most Kauai hostels are located in
Kapaa
6.1 Average rating of all hostels

Travel Tips for Kauai - from the Community

Travel Tips for Kauai - from the Community

Hey fam! Here are a few more tips from the community, from them to you, and you to them. This space is dedicated for travellers to share their best tips on backpacking Kauai. Have a closer look - the Hostelz community share real hidden gems, insider knowledge and overall impressions of Kauai. Everyone is welcome to add something useful, funny, unexpected and the "absolutely necessary to know before you go" - share, share and then share a little more!