329 hostels available. Prices start from $4 for a :roomType.
We compare all hostel prices in Bangkok for you. So you save money and time!

This section is dedicated to take away all your "I wish someone had told me that before I went!" experiences. This way, you are better prepared for what to expect, what not to expect and can spend less time settling in, and more time making new friends in your chosen hostel. We share our insider knowledge of tips, tricks and important things to look out for in Bangkok. To help you make friends with Bangkok before you visit, we've included a few helpful and fun things you should know about the area. Enjoy! 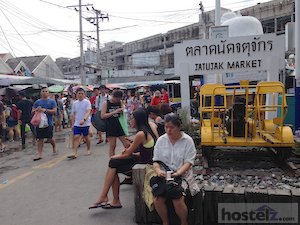 Bangkok (founded in 1782) is the capital of Thailand and easily the biggest city of the country with it's population of over 11 million people. There are plenty of accommodation options catering to different budgets. Bangkok (along with the rest of Thailand) is really backpacker-friendly and cheap for travelers. There are several areas with concentrated lodging options, like the legendary Khao San Road, which has the most hostels in Bangkok.

Bangkok is divided into 50 districts, but most places of interest (at least when it comes to sightseeing) are found in the Old City area (which is part of Rattanakosin Island). One of the notable things to go see is in the Old City is The Grand Palace which has served as the residence of Thai Kings since the 18th century (though the latest king has chosen to live elsewhere).

If you're interested in Thai Boxing, there are two stadiums in Bangkok (Ratchadamnoen Stadium and Lumphini Stadium) where you can watch matches. There are also plenty of other entertainment options, such as horse races, puppet theatre, thai dance etc. Also keep an eye out for the annual festivals, like Chinese New Year, the Songkran Festival, and the King's Birthday.

The taxis and tuktuk's (kind of a three-wheeled moped) are the most convenient options when traveling around Bangkok. However, keep your wits with you when bargaining the price, and ask the taxi drivers to use the meter (or alternatively negotiate a price that you feel comfortable paying). That being said, there is also a decent public transport system available, and the Skytrain covers most of the downtown area. There are also buses, boats, and a metro available.

Bangkok is very well known for its share of scam attempts, so remember to keep your street wits about you. If a deal seems to be almost too good to be true, it probably is.

There are plenty of frequently asked questions about hostels in Bangkok. We've collected the most common questions and doubts when it comes to picking your preferred accommodation in Bangkok. The more you know, the better you can plan with confidence and ease, right?

This makes this very website the best place to find cheap accommodation in Bangkok.

What are the best party hostels in Bangkok?
Lamurr Sukhumvit 41 is the best rated hostel for partying in Bangkok.

Above we list every single hostel there is in the city. Let us take a broader look at what you can expect - and what not. We created this cheatsheet for you to get a more complete picture of the hostel quality in Bangkok, average prices and types of hostels to choose from.
329 Total number of hostels
$16 Average dorm price
$39 Average private room price
$4 Cheapest hostel in Bangkok
19A Bangkok Hostel is the cheapest
97 Party hostels in Bangkok
Lamurr Sukhumvit 41 is the best rated
Most Bangkok hostels are located in
Phra Nakhon, Bangrak, Wattana
5 Average rating of all hostels

Travel Tips for Bangkok - from the Community

Travel Tips for Bangkok - from the Community

Hey fam! Here are a few more tips from the community, from them to you, and you to them. This space is dedicated for travellers to share their best tips on backpacking Bangkok. Have a closer look - the Hostelz community share real hidden gems, insider knowledge and overall impressions of Bangkok. Everyone is welcome to add something useful, funny, unexpected and the "absolutely necessary to know before you go" - share, share and then share a little more!