Welcome to your detailed guide for hostels in Kandy, Sri Lanka. You can choose from 31 Kandy hostels. In total, there are 68 cheap places to stay in Kandy such as guesthouses and bnbs. Prices start from $5 for a dorm.

Above we list every single hostel there is in the city. Let us take a broader look at what you can expect - and what not. We created this cheatsheet for you to get a more complete picture of the hostel quality in Kandy, average prices and types of hostels to choose from.

(Villa 92 City Stay is the cheapest)

(Deck on the Hills is the best rated)

Most Kandy hostels are located in

Hostels in Kandy for all Traveller Types

from $9
Best for Solo Traveller

from $7
Best for Female Solo Traveller

Deck on the Hills

Travelling on your own to Kandy? Fabulous!

Pick a great hostel designed with solo travellers in mind, and you're bound to meet plenty of like-minded people who have also dared to venture to Kandy alone. Here are the top hostels for solo travellers in Kandy. We've also highlighted which hostel offers special perks you, as a solo traveller, will love. Each hostel offers great social spaces to meet fellow backpackers and wonderful opportunities for making new friends. You'll soon realise that travelling on your own definitely does not mean travelling alone.

Deck on the Hills

This section is dedicated to take away all your "I wish someone had told me that before I went!" experiences. This way, you are better prepared for what to expect, what not to expect and can spend less time settling in, and more time making new friends in your chosen hostel. We share our insider knowledge of tips, tricks and important things to look out for in Kandy. To help you make friends with Kandy before you visit, we've included a few helpful and fun things you should know about the area. Enjoy! 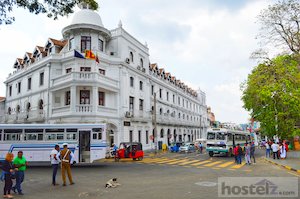 Located in the central province, Kandy, Sri Lanka, is one of the most visited and famous tourist spot and second-largest city in Sri Lanka after Colombo. Kandy is located almost in the middle of the island and it is surrounded by beautiful and thick green forest and mountain. The rail link from Kandy to Badullah is one of the most scenic and beautiful railway track in the world surrounded on both sides by tea plantations. Majority of the people in Kandy follow Christianity while Buddhism and Islam are also followed. The city is peaceful and people are liberal and friendly.

Must visit places in Kandy include the Buddhist temple Sri Dalada Maligawa or the Temple of the Sacred Tooth, Kandy Lake, Royal Palace of Kandy, Sigiriya, the ancient palace, Botanical Garden of Kandy, National Museum of Kandy, Dambulla Caves, Udawatta Kele Sanctuary, Wales Park, and Pallekele International Cricket Stadium. Esala Perahera is an annual event, which is celebrated every year in the month of August in Kandy, in which one of the relics of the tooth of the Buddha is carried in the streets of Kandy with dance and drums. People wear traditional dresses and carry the torch and the traditional flags of the old kingdom of Kandy.

The city of Kandy is well connected with the capital through road and rail links. Within the city center lies a two-story municipal market where local spices, tea, meat, fish, and almost anything is available at relatively lower prices set by municipal administration.

There are plenty of frequently asked questions about hostels in Kandy. We've collected the most common questions and doubts when it comes to picking your preferred accommodation in Kandy. The more you know, the better you can plan with confidence and ease, right?

How to find hostels in Kandy?

Hostelz.com shows all 31 Hostels in Kandy. Simply filter by neighborhood and price to find your perfect budget place to stay.

Which hostels in Kandy are good for families?

The Drop Inn Kandy is the best hostel in Kandy for families.

What are the coolest hostels in Kandy for female solo travellers?

2in1 Kandy is the best rated hostel in Kandy for female solo travellers.

What is the best way to find cheap accommodation in Kandy?

Hostelz.com compares prices for 31 hostels in Kandy, Sri Lanka. We list for you other cheap places to stay in Kandy such as

This makes this very website the best place to find cheap accommodation in Kandy.

What are the best party hostels in Kandy?

Deck on the Hills is the best rated hostel for partying in Kandy.
It offers: Bar.

Travel Tips for Kandy - from the Community

Oh man, so far no one from the community has left a comment or travel tips for Kandy. How about you kick start the discussion here? Gather your best backpacking recommendations for Kandy and jot them down below. The community thanks you.

Hostel? Check! Now let's have at your hostel packing list for Kandy and Sri Lanka.