Welcome to your detailed guide for hostels in Warner Beach, South Africa. You can choose from 2 Warner Beach hostels. In total, there are 2 cheap places to stay in Warner Beach such as guesthouses and bnbs. Prices start from $9 for a dorm.

This section is dedicated to take away all your "I wish someone had told me that before I went!" experiences. This way, you are better prepared for what to expect, what not to expect and can spend less time settling in, and more time making new friends in your chosen hostel. We share our insider knowledge of tips, tricks and important things to look out for in Warner Beach. To help you make friends with Warner Beach before you visit, we've included a few helpful and fun things you should know about the area. Enjoy! 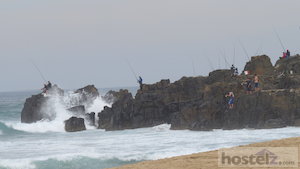 Warner Beach, South Africa, is just thirty kilometers from Durban along the coast road that leads to Port Shepstone. Unlike the other coastal towns on this stretch of road, it really feels like a suburb of Durban with its accommodation and office blocks and its busy main street.

The beach is wide and with fine sand. It’s fringed with vegetation-covered dunes, but it isn’t a swimming beach. The wind and waves are quite strong, so it’s more for surfers than sun bathers. It’s very popular during the Sardine Run in June and July, when migrating sardines bring whales and dolphins close to shore. As most of the town is up on the hillside, there are many great vantage points from which to see this.

Warner Beach is connected to Durban by Metrorail trains and by minibus taxis, and you can get further along the coast toward Port Shepstone by the same means, although this will mean changing a couple of times along the way, if you go further than Kelso, where the train terminates. Warner Beach is a much busier place than those further along the coast, but the advantage is you have everything you need at your fingertips.

Aliwal Shoal, one of the prime diving sites in South Africa, is just twenty kilometers away in Umkomaas, where you'll find hostel options if you can't find a bed at a Warner Beach, South Africa hostel.

There are plenty of frequently asked questions about hostels in Warner Beach. We've collected the most common questions and doubts when it comes to picking your preferred accommodation in Warner Beach. The more you know, the better you can plan with confidence and ease, right?

How to find hostels in Warner Beach?

Hostelz.com shows all 2 Hostels in Warner Beach. Simply filter by neighborhood and price to find your perfect budget place to stay.

What is the best way to find cheap accommodation in Warner Beach?

This makes this very website the best place to find cheap accommodation in Warner Beach.

Travel Tips for Warner Beach - from the Community

Hostel? Check! Now let's have at your hostel packing list for Warner Beach and South Africa.