This section is dedicated to take away all your "I wish someone had told me that before I went!" experiences. This way, you are better prepared for what to expect, what not to expect and can spend less time settling in, and more time making new friends in your chosen hostel. We share our insider knowledge of tips, tricks and important things to look out for in Pietermaritzburg. To help you make friends with Pietermaritzburg before you visit, we've included a few helpful and fun things you should know about the area. Enjoy! 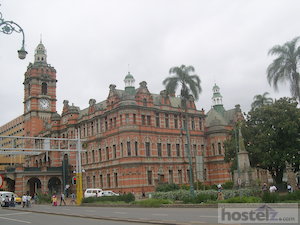 Sitting just around ninety kilometers and just over an hour's drive on the N3 north of Durban, Pietermaritzburg, South Africa, is often overlooked by travelers on their way from the Drakensberg mountains to the coast. This is a shame, as there is much to see and do in this bustling city of around half a million people. It is famous as being a landmark in the life of Mahatma Gandhi. In the late nineteenth century, a white man objected to his presence in the first-class carriage of a train to Pretoria. Gandhi, who had a first-class ticket, was ejected from the train at Pietermaritzberg, when he refused to move to the carriage for coloreds, and consequently made it his mission to oppose discrimination, which later developed into his philosophy of nonviolent protest or Satyagraha (devotion to the truth). There is a Gandhi statue on Church Street in the city center.

Pietermaritzberg also had a small part to play in the political life of Nelson Mandela. He was arrested in nearby Howick in the mid-twentieth century, kept overnight in a cell in Pietermaritzberg, and then transferred for trial in Johannesburg, from where he was sent to start his long stretch of twenty-seven years in prison.

Walking through the center, the streets are lined with historic buildings and statues. It's impossible not to be impressed by the huge, nineteenth-century, red-brick city hall. It's been kept in immaculate condition, and it really takes your breath away.

The Botanic Gardens, created in the later nineteenth century, sit on the northwestern edge of the city (a Napierville minibus from the city center will get you there). It's a lovely place to wander around and there are many trails leading up the hillside through forest, with great views over the city suburbs. Butterflies For Africa, in the east of the city, can also be visited (Sobantu minibus) and there is the Kwazulu-Natal Museum and the Tatham Art Gallery in the center. The tourist office in the city center has lots of information and leaflets for all the activities around Pietermaritzberg and beyond. The Midlands -- an important area in the Boer War, which now is home to several battlefields and museums -- can be visited in the surrounding countryside as a day trip.

The annual Dusi Canoe Marathon every January/February, has been held since the fifties, and starts in Pietermaritzberg on its three-day paddle to Durban. It is now the subject of a feature film "Beyond The River." The Comrades Marathon is an ultra-marathon, run on the Pietermaritzberg-Durban route, some ninety kilometers, starting in Durban and finishing in Pietermaritzberg, attracting runners from all over the world and is run annually around June. It was first run in almost a hundred years ago, with just thirty-four entrants. It now attracts twenty thousand participants.

Because Pietermaritzberg is so overlooked by international travelers or is done as a day trip from Durban, Pietermaritzburg, South Africa hostel accommodation is sometimes hard to find. Several hostels in Pietermaritzburg, South Africa have opened and closed within the last few years, so it's quite important to do your research first. There are plenty of guesthouses that cater for the domestic tourist -- the tourist office can help here with what's available.

This makes this very website the best place to find cheap accommodation in Pietermaritzburg.

Hostel? Check! Now let's have at your hostel packing list for Pietermaritzburg and South Africa.

Above we list every single hostel there is in the city. Let us take a broader look at what you can expect - and what not. We created this cheatsheet for you to get a more complete picture of the hostel quality in Pietermaritzburg, average prices and types of hostels to choose from.
1 Total number of hostels
5 Average rating of all hostels

Travel Tips for Pietermaritzburg - from the Community

Travel Tips for Pietermaritzburg - from the Community