1 Hostel in Harrismith available. Prices start from $9 for a dorm bed.
We compare all hostel prices in Harrismith for you. So you save money and time!

This section is dedicated to take away all your "I wish someone had told me that before I went!" experiences. This way, you are better prepared for what to expect, what not to expect and can spend less time settling in, and more time making new friends in your chosen hostel. We share our insider knowledge of tips, tricks and important things to look out for in Harrismith. To help you make friends with Harrismith before you visit, we've included a few helpful and fun things you should know about the area. Enjoy! 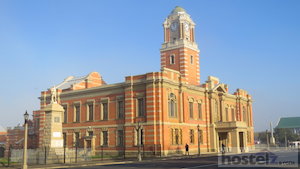 Harrismith, South Africa -- this small, sleepy town on National Route Three, between Johannesburg and Durban -- seems to get overlooked by many foreign travelers on their way into the Drakensberg or to the coast. It gets scant coverage in guide books, but has so much going for it. It is easily worth spending a couple of days here.

The town is dominated by the just-under two-thousand-four-hundred-meter Platberg Table Mountain sitting to the east. This nine-kilometer-long monster can be hiked in under five hours round trip, yielding magnificent views from the top. The hike traverses private land, so it is essential to get detailed information before you set out. The fifteen-kilometer Harrismith Mountain Race, to the top and back, is an annual event each October.

Harrismith was also the center of many important skirmishes during the Second Boer War at the turn of the twentieth century. The municipal cemetery has a large section that is dedicated to the many fallen British servicemen, including a couple tombstones inscribed for unknown soldiers. There is a military blockhouse, still in good condition, used by the British during the war, that you can visit; get detailed directions, as it is hard to find.

The red sandstone Town Hall, built in the early twentieth century, dominates the Town Center; you can see several other old buildings dating from the thirties on Warden Street.

The Platberg Nature Reserve (also known as Platberg Eco Park), sits on the southeastern edge of town and is privately run. There are some hiking trails, one of which leads up to the top of Platberg Mountain. The small reservoirs are nice places for a picnic and bird watching. The reserve is a mountain biker's dream, with many trails signposted and is also host to a mountain biking festival -- The Platberg Classic -- every August. The reserve is also home to eland (antelope), blesbok (antelope), zebra, and mountain reedbuck, as well as a multitude of alpine plants.

Harrismith is a popular destination for domestic tourists, and has many guesthouses as well as choices for Harrismith, South Africa hostels with dorm accommodation. It is also a good stopover on the way to the Drakensberg Mountains and the many hostels there. Trips into the mountains can be organized in Harrismith to the local area. Your Harrismith, South Africa hostel or guesthouse will have excellent information on these and other trips, such as the drive to the beautiful town of Clarens, just over ninety kilometers southwest of Harrismith. The drive south to the Drakensberg Mountains takes you from Free State, South Africa, into Kwazulu-Natal, past the Sterkfontein Dam Nature Reserve, and over the Oliviers Hoek Pass, a lovely drive.

There are plenty of frequently asked questions about hostels in Harrismith. We've collected the most common questions and doubts when it comes to picking your preferred accommodation in Harrismith. The more you know, the better you can plan with confidence and ease, right?

This makes this very website the best place to find cheap accommodation in Harrismith.

Hostel? Check! Now let's have at your hostel packing list for Harrismith and South Africa.

Above we list every single hostel there is in the city. Let us take a broader look at what you can expect - and what not. We created this cheatsheet for you to get a more complete picture of the hostel quality in Harrismith, average prices and types of hostels to choose from.
1 Total number of hostels
9.1 Average rating of all hostels

Travel Tips for Harrismith - from the Community

Travel Tips for Harrismith - from the Community

Oh man, so far no one from the community has left a comment or travel tips for Harrismith. How about you kick start the discussion here? Gather your best backpacking recommendations for Harrismith and jot them down below. The community thanks you.