2 hostels available. Prices start from $9 for a dorm bed.
We compare all hostel prices in Addo for you. So you save money and time!

This section is dedicated to take away all your "I wish someone had told me that before I went!" experiences. This way, you can spend less time settling in, and more time making new friends in your chosen hostel. We share our insider knowledge of tips, tricks and important things to look out for in Addo. 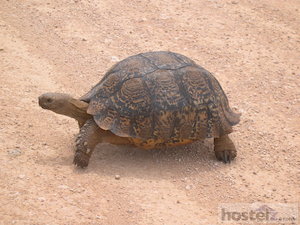 Addo is a wildlife conservation park near Port Elizabeth, South Africa. It is one of the largest national parks in the country, after Kruger National Park and the Kgalagadi Transfrontier Park. The park was originally created in 1931 in order to protect the remaining eleven elephants. Today, it now encompasses not only the original park but also the Woody Cape Nature Reserve and a marine reserve. This makes it one of the few conservation parks to include five distinct biomes and the only national park in the world to host all of Africa’s Big Seven (elephant, lion, leopard, buffalo, rhino, great white shark, and whale) in their natural habitat.

The Addo area, on South Africa’s East Cape, is mostly national park and as such you will find plenty of accommodation nearby. There are only a few hostels though, and they won’t be the traditional European-style hostels you may be used to. Expect hostels near Addo to be focused on the nature and wildlife lover. You will be able to book tours of the national park through the hostel or arrange 4x4 off-roading, mountain biking, hiking, horseback riding, and river cruising. If you prefer a guesthouse or safari lodge, you can find them in Addo as well.

To get here, you can fly in Port Elizabeth and arrange transport to Addo. If you choose to hire a car, the roads are sealed and accessible for all cars.

Addo has long been known for the wildlife in the area, from the herds of elephants to various antelope species and warthogs, but there is also plenty else to do. Visit the Patensie river valley, with its miles of citrus orchard, the lush Zuurberg Mountains and the pass used by the Gen Smuts in the Boer War, and Grahamstown, a charming cathedral and university city with an unusually large proportion of schools and students. While the main attraction in Addo is certainly the conservation park, make time to see the outlying area as well.

There are plenty of frequently asked questions about hostels in Addo. We've collected the most common questions and doubts when it comes to picking your preferred accommodation in Addo. The more you know, the better you can plan with confidence and ease, right?

This makes this very website the best place to find cheap accommodation in Addo.

Above we list every single hostel there is in the city. Let us take a broader look at what you can expect - and what not. We created this cheatsheet for you to get a more complete picture of the hostel quality in Addo, average prices and types of hostels to choose from.
2 Total number of hostels
2 Party hostels in Addo
Orange Elephant Backpackers & Thirsty Herds Pub is the best rated
3.4 Average rating of all hostels

Travel Tips for Addo - from the Community

Travel Tips for Addo - from the Community

Oh man, so far no one from the community has left a comment or travel tips for Addo. How about you kick start the discussion here? Gather your best backpacking recommendations for Addo and jot them down below. The community thanks you.