All Hostels in Moscow

Compare prices for hostels in Moscow with one click. Add your travel dates and see all prices on all hostel booking sites like Hostelworld, Hostelsclub and Booking.com. 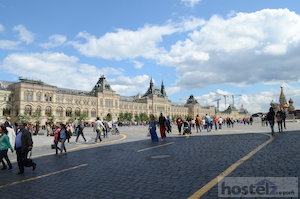 There is a few things you should know about Moscow hostels and the city in general. Besides comparing you the best and cheapest hostels in Moscow, we also highlight what we have liked, disliked and things to look out for.

Moscow is the capitol of Russia and a major political and cultural center. It is arranged in a circular way. If you are looking for a Moscow hostel, there are several possible areas of the city.

Generally speaking, it is reasonable and recommended to try to find Moscow hostel somewhere close to the Kremlin which is close to the Arbat, a pedestrian street in the center of the city. Arbat and its surrounding area is a place of contrasts: beautiful historic villas stand next to ugly grey multi-story buildings and you will find fast food chains next to traditional Russian restaurants. Another interesting place to look for a Moscow hostel: Kitaj Gorod, is one of the oldest parts of the city and you can still see the old city wall there. Samoskworetsche is vis-à-vis of the Kremlin on the other side of Moskva River and provides a really nice view of the city. The Boulevard Ring is the green zone in the middle of the city with lots of parks and greenlands.

Getting around from your Moscow hostel is theoretically easy since there is an extensive public transport system consisting of subway trains, trams, and buses. In reality, it is quite difficult to use the bus system if you are unable to understand and especially read Russian.

The metro is probably most easy to use for tourists, but always carry a metro map with both English and Russian writing to be able to figure out which line to take and where you are. Using the metro is an absolute must since it is famous for its art, murals, mosaics, and ornate chandeliers. There are no less than five airports that serve Moscow; they are all accessible by train. Allow enough time for traveling purposes, especially getting to the airport, since you might encounter difficulties.

While staying in a Moscow hostel, you will definitely not run out of things to do: visit the Kremlin, admire the Red Square and spend time in the mind-blowing museums such as the Tretyakov gallery of the Pushkin Museum of Fine Art. See the famous Russian State Ballet at the Bolshoi Theatre or check out Moscow’s vibrant nightlife. Be warned that it might be difficult for a foreigner to find their way so it might be a good idea to employ a Russian-speaking tour guide. Also make sure to arrange for a visa well in advance, or you will be denied access to the country.

Things to do in Moscow

Here is a few more tips from the community. Other travelers share their best tips on backpacking Moscow:

This place has more culture than any city I have ever visited -- the Russian soul is evident and very real. They are a proud people who love who they are and what their nation has accomplished. I cannot get enough of visiting mother Russia.

Moscow is such amazing place! I've been many places in Europe and in Russia as well and it is on the top tier cities of Europe in my mind. The people are just awesome to you there and the women were so beautiful everywhere we went. Food is hit and miss depending on where you stay, as well as the overly salty McDonald's as well. Red Square is the pinnacle of what Russia is as a country and is a must see when visiting. You will witness poverty, extreme wealth, and gorgeous architecture all in one afternoon traveling. Be aware of pickpockets and thieves of course although, no one in my group had any issues there at all. Trains will take you to anywhere you want to go but be aware they are not that nice or plush so don't expect much. The history alone will take your breath away as you move through the city. Traffic from the airport is terrible if flying in and will take you three hours to get in or out so be ready. It's the best city I've ever been to but, yes, it's a bit pricey for some. You will love it!

They say that Moscow is the biggest village in the world -- a place you will love or hate, but one you must see in your lifetime to appreciate the gravity of history. Russians are intense people who don't mince words, which often rubs Anglo-Saxons the wrong way. I loved Moscow for the contradictions that it is; vibrant, monotone, beautiful and hideous, artistic and bland... a mystery i will return to.

What a great city!! I enjoyed it as much as New York, but it's a bit expensive and I live in Dublin!