24 hostels available. Prices start from $9 for a dorm bed.
We compare all hostel prices in Bucharest for you. So you save money and time!

This section is dedicated to take away all your "I wish someone had told me that before I went!" experiences. This way, you are better prepared for what to expect, what not to expect and can spend less time settling in, and more time making new friends in your chosen hostel. We share our insider knowledge of tips, tricks and important things to look out for in Bucharest. To help you make friends with Bucharest before you visit, we've included a few helpful and fun things you should know about the area. Enjoy!

Guess what? Bucharest is also named and spelled București - It is the same destination. Goodbye confusion. 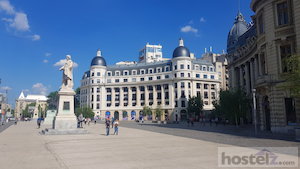 Bucharest is a very urban city. This Eastern Balkan capital is the by far the most developed and commercial city in Romania. Culturally there is plenty to do and see in Bucharest, but most of all travelers flock here to take up the communist past and see the dynamic development as well as for the famed night life. Yes, beer here is cheap, and there were massive communist building projects that are now giving way to massive commercial investments, but the city's previous past is not to be overlooked. Once deemed the “Paris of the East” there are still relics to the grandness, indeed similar to Paris, that once graced this city.

Just a few years ago Bucharest hostels were hard to come by, but now finding the right one may seem daunting. The sights in Bucharest aren't all terribly centrally located. The “old-town” isn't huge and much of the nightlife is touristy there. Just consider the ease of getting to your Bucharest hostel, most people arriving by train get in at North Station “Gara de Nord“ which is on the subway and serves a big city bus hub. Districts in Bucharest often cover a few neighborhoods and numbered from the center outward. So district 1 is most central. Check that your hostel is adjacent to major public transportation, as it makes getting around this big city much easier. Drivers should on the other hand be leery of parking or driving in the center of town.

There are plenty of excellent hostels in Bucharest, with very friendly staff, and the Hostelz.com Burcharest Hostels list is the best way to find the right hostel for your trip.

There are plenty of frequently asked questions about hostels in Bucharest. We've collected the most common questions and doubts when it comes to picking your preferred accommodation in Bucharest. The more you know, the better you can plan with confidence and ease, right?

This makes this very website the best place to find cheap accommodation in Bucharest.

Hostel? Check! Now let's have at your hostel packing list for Bucharest and Romania.

Above we list every single hostel there is in the city. Let us take a broader look at what you can expect - and what not. We created this cheatsheet for you to get a more complete picture of the hostel quality in Bucharest, average prices and types of hostels to choose from.
24 Total number of hostels
$16 Average dorm price
$29 Average private room price
$10 Cheapest hostel in Bucharest
Alex Villa Hostel is the cheapest
9 Party hostels in Bucharest
T5 Social is the best rated
Most Bucharest hostels are located in
Sector 1, District 1, District 3
5.2 Average rating of all hostels

Travel Tips for Bucharest - from the Community

Travel Tips for Bucharest - from the Community

Hey fam! Here are a few more tips from the community, from them to you, and you to them. This space is dedicated for travellers to share their best tips on backpacking Bucharest. Have a closer look - the Hostelz community share real hidden gems, insider knowledge and overall impressions of Bucharest. Everyone is welcome to add something useful, funny, unexpected and the "absolutely necessary to know before you go" - share, share and then share a little more!