33 hostels available. Prices start from $14 for a :roomType.
We compare all hostel prices in Lagos for you. So you save money and time!

This section is dedicated to take away all your "I wish someone had told me that before I went!" experiences. This way, you are better prepared for what to expect, what not to expect and can spend less time settling in, and more time making new friends in your chosen hostel. We share our insider knowledge of tips, tricks and important things to look out for in Lagos. To help you make friends with Lagos before you visit, we've included a few helpful and fun things you should know about the area. Enjoy! 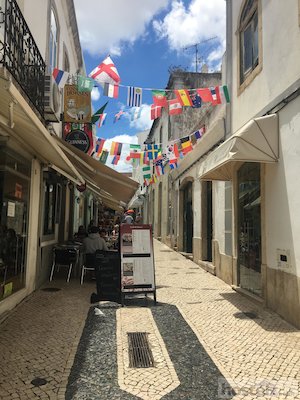 Lagos, located in the Algarve region in southern Portugal, is one of the nicest towns around. It is equally suitable for nature lovers, history buffs, and party animals. Nature lovers are likely to appreciate the town's dramatic coastline with its steep brown, orange, and grey colored cliffs inhabited by wild birds and fragrant plants.

If swimming among the cliffs is not your thing, then you may be attracted by the town's long history, going back more than 2000 years. Lagos flourished into a significant port during During the Age of Discovery when it served as a base for famous sea explorers and tradesmen. Infamously, Lagos also was a major slave market from which African captives were dispersed throughout Europe and shipped to the New World.

Nowadays, Lagos hostels are often full as it is one of the most visited Algarvean towns, particularly by young English-speaking backpackers. While those favoring package holidays head for the neighboring towns of Portimão and Luz, the wilder crowds go for Lagos.

The town center is full of restaurants, hostels, bars, and nightclubs, many owned by the internationals. You are more likely to hear English than Portuguese in the streets of Lagos old town during the summer months. Offices offering various excursions, e.g. dolphin watching, scuba diving courses, car, and motorbike rentals are scattered around the town. You can also ask about activities at your Lagos hostel front desk.

The Lagos nightlife is legendary. One can dance, party, and pub crawl till sunrise the next morning. Many Lagos hostels describe themselves as "party hostels," so you can expect a certain rhythm of life if you decide to book a bed there.

In general, Lagos is an extremely welcoming town for all sorts of independent visitors. Although old enough to shame many serious European cities, Lagos maintains its youthful fun-loving attitude, and, despite all that drinking and partying every single night of the summer, keeps itself fresh and beautiful.

There are plenty of frequently asked questions about hostels in Lagos. We've collected the most common questions and doubts when it comes to picking your preferred accommodation in Lagos. The more you know, the better you can plan with confidence and ease, right?

This makes this very website the best place to find cheap accommodation in Lagos.

What are the best party hostels in Lagos?
Olive Hostel Lagos is the best rated hostel for partying in Lagos.

Hostel? Check! Now let's have at your hostel packing list for Lagos and Portugal.

Above we list every single hostel there is in the city. Let us take a broader look at what you can expect - and what not. We created this cheatsheet for you to get a more complete picture of the hostel quality in Lagos, average prices and types of hostels to choose from.
33 Total number of hostels
$29 Average dorm price
$86 Average private room price
$13 Cheapest hostel in Lagos
Lagos Marina Guest House is the cheapest
11 Party hostels in Lagos
Olive Hostel Lagos is the best rated
7 Average rating of all hostels

Travel Tips for Lagos - from the Community

Travel Tips for Lagos - from the Community

Hey fam! Here are a few more tips from the community, from them to you, and you to them. This space is dedicated for travellers to share their best tips on backpacking Lagos. Have a closer look - the Hostelz community share real hidden gems, insider knowledge and overall impressions of Lagos. Everyone is welcome to add something useful, funny, unexpected and the "absolutely necessary to know before you go" - share, share and then share a little more!