2 hostels available. Prices start from $9 for a :roomType.
We compare all hostel prices in Derry for you. So you save money and time!

This section is dedicated to take away all your "I wish someone had told me that before I went!" experiences. This way, you are better prepared for what to expect, what not to expect and can spend less time settling in, and more time making new friends in your chosen hostel. We share our insider knowledge of tips, tricks and important things to look out for in Derry. To help you make friends with Derry before you visit, we've included a few helpful and fun things you should know about the area. Enjoy!

Guess what? Derry is also named and spelled Londonderry - It is the same destination. Goodbye confusion. 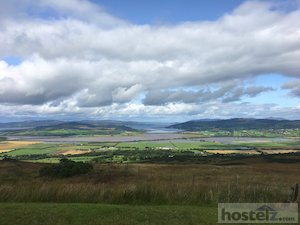 Londonderry, Northern Ireland, has about eighty-five thousand inhabitants, which makes it the second-largest city in Northern Ireland and the home of a selection of hostels. The city has its roots back in the sixth century, when a monastery was built. Londonderry has bloody history; in the late seventeenth century, Catholic-Jacobite troops besieged the then-Protestant city for three months. Since the late sixties, the city has been shaken by troubles for a few decades and was the scene of bloody clashes between Anglicans and Presbyterians of English and Scottish descent (Protestants or Unionists) and the Catholic-Irish-born residents (Catholics or Republicans) during the Northern Irish conflict in the mid-seventies. There were huge disputes between Irish nationalists, who were deliberately using the old name Derry and the rest who were referring to it as Londonderry.

Today, the situation is far less intense and you can visit the city without getting into political trouble. Worth visiting is the old town of Derry, with its city wall from the seventeenth century, which is considered the best preserved in Britain and Ireland; St. Columb's Cathedral, the largest Anglican cathedral in Northern Ireland; the Tower Museum; the Bloody Sunday Monument; and the Amelia Earhart Center.

There are plenty of frequently asked questions about hostels in Derry. We've collected the most common questions and doubts when it comes to picking your preferred accommodation in Derry. The more you know, the better you can plan with confidence and ease, right?

This makes this very website the best place to find cheap accommodation in Derry.

Above we list every single hostel there is in the city. Let us take a broader look at what you can expect - and what not. We created this cheatsheet for you to get a more complete picture of the hostel quality in Derry, average prices and types of hostels to choose from.
2 Total number of hostels
8 Average rating of all hostels

Travel Tips for Derry - from the Community

Travel Tips for Derry - from the Community

Oh man, so far no one from the community has left a comment or travel tips for Derry. How about you kick start the discussion here? Gather your best backpacking recommendations for Derry and jot them down below. The community thanks you.