Welcome to your detailed guide for hostels in Bushmills, Northern Ireland. You can choose from 2 Bushmills hostels. In total, there are 2 cheap places to stay in Bushmills such as guesthouses and bnbs. Prices start from $24 for a dorm.

This section is dedicated to take away all your "I wish someone had told me that before I went!" experiences. This way, you are better prepared for what to expect, what not to expect and can spend less time settling in, and more time making new friends in your chosen hostel. We share our insider knowledge of tips, tricks and important things to look out for in Bushmills. To help you make friends with Bushmills before you visit, we've included a few helpful and fun things you should know about the area. Enjoy! 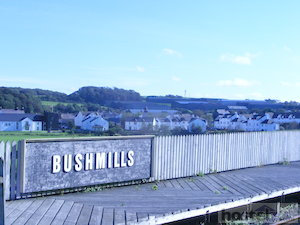 A small town, mostly popular because of its whiskey distillery, Bushmills has some interesting attractions to offer a visitor. But its location near many other popular Northern Ireland destinations is what makes it worth staying in a hostel here. Tour buses often frequent the town, laden with older, wizened travelers eager to stop off and take a tour of the distillery and soak in some history (and whiskey!).

The best way to get to and from the Bushmills is by car, but bus and train connections are possible, and you can get around to other attractions via the train or the bus. Summer tends to have more frequent departures. It is reasonably easy to get around from your Bushmills hostel in town as well. There is a Co-Op store for groceries, and other local necessities (post office or pharmacy) within Bushmills, making it easy on the traveler (especially one without a car).

Although it isn't very big, Bushmills has a long history, mostly revolving around the Bushmill Whiskey Distillery, which is worth checking out; once you've done that, be sure to venture from the town to the Giant's Causeway (which has fascinated humans for ages and inspired all sorts of legendary stories about giants) or Dunlance Castle (which is featured on many Northern Ireland postcards and on travel advertisements). Giant's Causeway now charges a fair admission price, but those with a National Trust membership can get in for free.

Spend your evening in a pub (most public houses are very historic and have long thrilling past occupants) and enjoy the rich Irish charm that the Bushmills has to offer.

There are plenty of frequently asked questions about hostels in Bushmills. We've collected the most common questions and doubts when it comes to picking your preferred accommodation in Bushmills. The more you know, the better you can plan with confidence and ease, right?

How much are hostels in Bushmills?

How to find hostels in Bushmills?

Hostelz.com shows all 2 Hostels in Bushmills. Simply filter by neighborhood and price to find your perfect budget place to stay.

Which hostels in Bushmills are good for families?

Bushmills Youth Hostel is the best hostel in Bushmills for families.

What are the best hostels in Bushmills for groups?

Bushmills Youth Hostel is the best hostel in Bushmills for groups.

What is the best way to find cheap accommodation in Bushmills?

This makes this very website the best place to find cheap accommodation in Bushmills.

Travel Tips for Bushmills - from the Community

Oh man, so far no one from the community has left a comment or travel tips for Bushmills. How about you kick start the discussion here? Gather your best backpacking recommendations for Bushmills and jot them down below. The community thanks you.

Hostel? Check! Now let's have at your hostel packing list for Bushmills and Northern Ireland.