29 Hostels for Backpackers available. Prices start from $17 for a :roomType.
We compare all hostel prices in Auckland for you. So you save money and time!

This section is dedicated to take away all your "I wish someone had told me that before I went!" experiences. This way, you are better prepared for what to expect, what not to expect and can spend less time settling in, and more time making new friends in your chosen hostel. We share our insider knowledge of tips, tricks and important things to look out for in Auckland. To help you make friends with Auckland before you visit, we've included a few helpful and fun things you should know about the area. Enjoy! 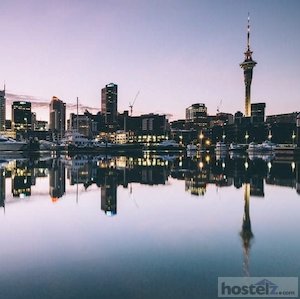 Auckland is the largest city in New Zealand with a population of over one million people. Situated in the north island of New Zealand, it is also the main point of entry to the country (second only to Christchurch on the south island), which also means there are a wide select of backpacker hostels in Auckland.

Auckland's nickname is the City of Sails, which is very fitting as the harbor is usually filled with sailboats. The city itself is built on volcanic ground (over 48 volcanoes on Auckland city proper).

Most people arrive to Auckland via plane. There is a shuttle bus service from the airport to various parts of the city, with the prices from about NZ$25 and up. There is a public transport system available, but the inner city area is small enough that walking is an enjoyable alternative. Good options for inter-city travel are the bus passes and also car rental, especially if you're not traveling alone.

The Auckland hostel selection is plentiful, and you can expect to pay about NZ$20 and up for a dorm room. The city is very suitable for backpackers, as the prices are quite low, the hostel options are comprehensive, and the transport inside the city and also in-between cities is exceptionally well organized.

The sights in Auckland include the Sky Tower, which is the highest free-standing building in the whole of southern hemisphere. The adrenaline junkies can also indulge in a controlled free-fall jump from the top of the tower. Auckland also has plenty of museums and art galleries. If you're interested in fashion, Auckland is home to many interesting local designers.

Take a look at the Auckland backpacker hostel list and enjoy your stay.

There are plenty of frequently asked questions about hostels in Auckland. We've collected the most common questions and doubts when it comes to picking your preferred accommodation in Auckland. The more you know, the better you can plan with confidence and ease, right?

This makes this very website the best place to find cheap accommodation in Auckland.

Hostel? Check! Now let's have at your hostel packing list for Auckland and New Zealand.

Above we list every single hostel there is in the city. Let us take a broader look at what you can expect - and what not. We created this cheatsheet for you to get a more complete picture of the hostel quality in Auckland, average prices and types of hostels to choose from.
29 Total number of hostels
$20 Average dorm price
$64 Average private room price
$18 Cheapest hostel in Auckland
Haka Lodge Auckland is the cheapest
4 Party hostels in Auckland
Base Auckland is the best rated
Most Auckland hostels are located in
Central, Ponsonby, Parnell
6.4 Average rating of all hostels

Travel Tips for Auckland - from the Community

Travel Tips for Auckland - from the Community

Hey fam! Here are a few more tips from the community, from them to you, and you to them. This space is dedicated for travellers to share their best tips on backpacking Auckland. Have a closer look - the Hostelz community share real hidden gems, insider knowledge and overall impressions of Auckland. Everyone is welcome to add something useful, funny, unexpected and the "absolutely necessary to know before you go" - share, share and then share a little more!