6 hostels available. Prices start from $29 for a :roomType.
We compare all hostel prices in Rotterdam for you. So you save money and time!

This section is dedicated to take away all your "I wish someone had told me that before I went!" experiences. This way, you are better prepared for what to expect, what not to expect and can spend less time settling in, and more time making new friends in your chosen hostel. We share our insider knowledge of tips, tricks and important things to look out for in Rotterdam. To help you make friends with Rotterdam before you visit, we've included a few helpful and fun things you should know about the area. Enjoy! 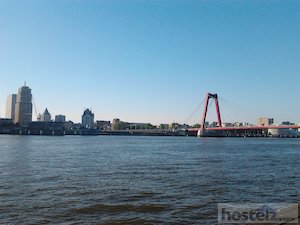 Rotterdam, Netherlands, was once known as a boring city, but it is now one of the most vibrant in the Netherlands. The port city was bombed in World War II and has been rebuilt, but with a completely different look. The vibe and the architecture are very different from any other Dutch city and is absolutely worth a visit. There is a reason that many guidebooks and other media put Rotterdam on their list of best cities to visit.

Even though some leading media are raving about Rotterdam, the city receives only a fraction of the tourists that Amsterdam receives. If Amsterdam feels like Disneyland to you, and prefer a place where there are not hundreds of tourists taking a picture of the same thing, then you may like Rotterdam. Rotterdam is not about the canals and warehouses from the Middle Ages; Rotterdam is where you can find modern architecture, and architecture lovers may need an extra memory card for their photos.

Some newbies do not fall in love with Rotterdam at first sight. Many nice cafes and restaurants are a bit hidden, so it is helpful to ask some locals. Although there are a few sites worth seeing, such as the Euromast, the SS Rotterdam, Markthal, and several museums, Rotterdam is also a city where you have to discover the different areas. Visit Katendrecht, het Oude Noorden, Delfshaven, Witte de Withkwartier, Oude Haven, and chill out at the Kralingse Plas in summer. A daytrip to the windmills in Kinderdijk can also not be missed.

Rotterdam is also home to many events. Rotterdam City Racing, where you can watch Formula One cars driving through the city centre; World Port Days; and Rotterdam Unlimited (previously called Summer Carnival) and the Rotterdam International Film Festival are just a few of the annual events.

Rotterdam is a great and vibrant city, but the best places tend to be hidden. The locals will happily share hidden places with you, but deep in their heart they also like to keep it hidden from the general public, because Rotterdammers are afraid that their beloved city will be overtaken by tourists like Amsterdam is.

There are plenty of frequently asked questions about hostels in Rotterdam. We've collected the most common questions and doubts when it comes to picking your preferred accommodation in Rotterdam. The more you know, the better you can plan with confidence and ease, right?

This makes this very website the best place to find cheap accommodation in Rotterdam.

What are the best party hostels in Rotterdam?
Sparks Hostel is the best rated hostel for partying in Rotterdam.

Hostel? Check! Now let's have at your hostel packing list for Rotterdam and Netherlands.

Above we list every single hostel there is in the city. Let us take a broader look at what you can expect - and what not. We created this cheatsheet for you to get a more complete picture of the hostel quality in Rotterdam, average prices and types of hostels to choose from.
6 Total number of hostels
$37 Average dorm price
$130 Average private room price
$29 Cheapest hostel in Rotterdam
Thuis bij Schell is the cheapest
4 Party hostels in Rotterdam
Sparks Hostel is the best rated
8.6 Average rating of all hostels

Travel Tips for Rotterdam - from the Community

Travel Tips for Rotterdam - from the Community

Oh man, so far no one from the community has left a comment or travel tips for Rotterdam. How about you kick start the discussion here? Gather your best backpacking recommendations for Rotterdam and jot them down below. The community thanks you.