Welcome to your detailed guide for hostels in Catania, Italy. You can choose from 10 Catania hostels. In total, there are 90 cheap places to stay in Catania such as guesthouses and bnbs. Prices start from $16 for a dorm.

Above we list every single hostel there is in the city. Let us take a broader look at what you can expect - and what not. We created this cheatsheet for you to get a more complete picture of the hostel quality in Catania, average prices and types of hostels to choose from.

(The Yard Hostel is the best rated)

Hostels in Catania for all Traveller Types

from $16
Best for Solo Traveller

from $27
Best for Female Solo Traveller

Travelling on your own to Catania? Fabulous!

Pick a great hostel designed with solo travellers in mind, and you're bound to meet plenty of like-minded people who have also dared to venture to Catania alone. Here are the top hostels for solo travellers in Catania. We've also highlighted which hostel offers special perks you, as a solo traveller, will love. Each hostel offers great social spaces to meet fellow backpackers and wonderful opportunities for making new friends. You'll soon realise that travelling on your own definitely does not mean travelling alone.

This section is dedicated to take away all your "I wish someone had told me that before I went!" experiences. This way, you are better prepared for what to expect, what not to expect and can spend less time settling in, and more time making new friends in your chosen hostel. We share our insider knowledge of tips, tricks and important things to look out for in Catania. To help you make friends with Catania before you visit, we've included a few helpful and fun things you should know about the area. Enjoy! 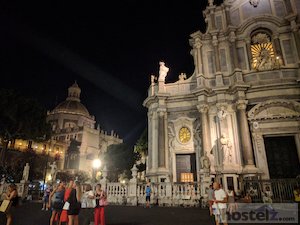 Catania, a lovely city on the east coast of Sicily, has as its background the Ionian Sea, and on the opposite side you can see the bad-tempered Mount Etna. The city may look a bit touristic in some streets and a little bit too busy and overcrowded -- it is one of the largest cities in Italy -- but you will love it after starting to explore! The city is well developed and is a busy, touristic place, mostly in summer (July and August).

The city is nice to explore, so take a walk to the center of the city and be amazed with the many historical buildings -- the Baroque city center of Catania is listed as a UNESCO World Heritage Site -- and if you like churches, in Catania you can find dozens of them. Although, one of the most remarkable place lies just outside the city -- the Roman ruins, with an amazingly well-preserved amphitheater.

Nearby is Mount Etna, a still-active volcano that has a history of eruptions, earthquakes, and destruction of neighboring cities -- it is definitely worth a visit. When you get to Mount Etna, there is a really steep, rocky road that marks the beginning of the best trekking path in the area; it will allow you to go to the crater rim and have an amazing view of the lava flows, other small cones in the main cone -- some of them still active -- and the surroundings of this impressive volcano. It's the must-do in this area.

The easiest way to get to Catania is by car and booking a rental car in advance is something you should consider, especially in summer because there can be a shortage of cars on the entire island.

Since it's one of the biggest cities on the island, it won't be a problem to find hostels in Catania. You can expect staff with good English and good facilities. Catania's hostels are also a good place to ask information about the best way to go to Mount Etna and can give you some valuable insight about the city.

There are plenty of frequently asked questions about hostels in Catania. We've collected the most common questions and doubts when it comes to picking your preferred accommodation in Catania. The more you know, the better you can plan with confidence and ease, right?

How to find hostels in Catania?

Hostelz.com shows all 10 Hostels in Catania. Simply filter by neighborhood and price to find your perfect budget place to stay.

Which hostels in Catania are good for families?

UrbanPop is the best hostel in Catania for families.

What are the coolest hostels in Catania for female solo travellers?

Casa Verdi is the best rated hostel in Catania for female solo travellers.

What is the best way to find cheap accommodation in Catania?

Hostelz.com compares prices for 10 hostels in Catania, Italy. We list for you other cheap places to stay in Catania such as

This makes this very website the best place to find cheap accommodation in Catania.

What are the best party hostels in Catania?

The Yard Hostel is the best rated hostel for partying in Catania.
It offers: Bar.

Travel Tips for Catania - from the Community

Oh man, so far no one from the community has left a comment or travel tips for Catania. How about you kick start the discussion here? Gather your best backpacking recommendations for Catania and jot them down below. The community thanks you.

Hostel? Check! Now let's have at your hostel packing list for Catania and Italy.