18 hostels available. Prices start from $17 for a dorm bed.
We compare all hostel prices in Jerusalem for you. So you save money and time!

This section is dedicated to take away all your "I wish someone had told me that before I went!" experiences. This way, you can spend less time settling in, and more time making new friends in your chosen hostel. We share our insider knowledge of tips, tricks and important things to look out for in Jerusalem. 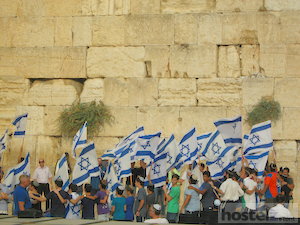 Jerusalem, a city of more than 4000 years old, is the holy place for the three major monotheistic religions (Judaism, Christianity, and Islam) and the desired capital by both Israelis and Palestinians. No wonder Jerusalem consists of many distinctive parts and there are many Jerusalem hostels to serve the numerous visitors to the city.

The oldest part is the walled Old City, in which you can find four different quarters: the Jewish, the Arab, the Christian, and the Armenian. The Old City is where many of the holy pilgrimage sites are located: the Western (Wailing) wall for the Jews, the Al-Aqsa Mosque for the Muslims, the Church of the Holy Sepulchre and the Via Dolorosa for the Christians, to mention a few. Visitors also like to indulge themselves in shopping at the souqs of the Old City.

West of the Old City is the modern Israeli Jerusalem which includes the official city centre, situated around the Ben Yehuda, Yafo and Ha-Melekh George streets’ triangle. Here some of the locals leading their everyday lives can be observed (as the Old City is heavily occupied by tourists on a regular day). A major attraction in West Jerusalem is the Yad Vashem museum-memorial for the Holocaust victims - you will likely need to take a bus to get there from the city centre.

The Israeli Central Bus Station, meanwhile, is located in West Jerusalem. To get there you will need to take a city bus, such as the #1 from outside the Western Wall on the opposite side of the Old City. Otherwise, prepare for a long walk.

When choosing a hostel in Jerusalem, think what are you going to see and where are you going to spend most of your time. You can find hostels in the Old City and in the modern city center as well as in the Israeli Central Bus Station neighborhood.

If you are going to concentrate on the holy pilgrimage sites or use your stay in Jerusalem as a base for exploring the West Bank, you may want to look for a hostel in the Old City. If you are interested in the nightlife and the modern city center, you could do with a place there. And if you want to take side trips to other parts of Israel (e.g. Tel Aviv or the Dead Sea) consider finding a hostel close to the Central Bus station.

We've collected the most common questions for hostels in Jerusalem. The more you know, the better you can plan with confidence and ease, right?

This makes Hostelz.com the best place to find cheap accommodation in Jerusalem.

Above we list every single hostel there is in the city. Let us take a broader look at what you can expect - and what not. We created this cheatsheet for you to get a more complete picture of the hostel quality in Jerusalem, average prices and types of hostels to choose from.
18 Total number of hostels
$32 Average dorm price
$153 Average private room price
$17 Cheapest hostel in Jerusalem
Petra Hostel is the cheapest
4 Party hostels in Jerusalem
Capsule Space X is the best rated
Most Jerusalem hostels are located in
Old City, Downtown Triangle, City Centre
5.7 Average rating of all hostels

Travel Tips for Jerusalem - from the Community

Travel Tips for Jerusalem - from the Community

Hey fam! Here are a few more tips from the community, from them to you, and you to them. This space is dedicated for travellers to share their best tips on backpacking Jerusalem. Have a closer look - the Hostelz community share real hidden gems, insider knowledge and overall impressions of Jerusalem. Everyone is welcome to add something useful, funny, unexpected and the "absolutely necessary to know before you go" - share, share and then share a little more!