Welcome to your detailed guide for hostels in Strasbourg, France. You can choose from 2 Strasbourg hostels. In total, there are 11 cheap places to stay in Strasbourg such as guesthouses and bnbs. Prices start from $37 for a dorm.

This section is dedicated to take away all your "I wish someone had told me that before I went!" experiences. This way, you are better prepared for what to expect, what not to expect and can spend less time settling in, and more time making new friends in your chosen hostel. We share our insider knowledge of tips, tricks and important things to look out for in Strasbourg. To help you make friends with Strasbourg before you visit, we've included a few helpful and fun things you should know about the area. Enjoy! 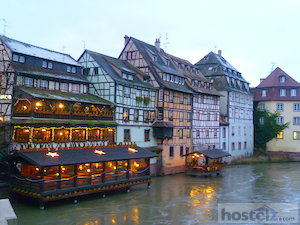 Strasbourg is not very big, but there are plenty of options for hostels in Strasbourg. It is probably most known as the city in which the European Parliament is officially seated. However, Strasbourg is more than two thousand years old and has seen many wars and battles in its history due to its location. It has been part of the Roman Empire, France, and Germany, and it is not surprising that it has kept significant cultural heritage.

There are many other sights which are interesting for visitors. You should not miss Barrage Vauban, the Gothic Cathedral, the Chambre de Commerce et d'Industrie, the Église Saint-Thomas, the Musée des Beaux-Arts, the Musée d'Art moderne et contemporain, the Musée archéologique, the Musée alsacien, and the Musée historique. The city has also preserved many charming medieval streets.

The hostels in Strasbourg are located in the very center or very close to the center. The center is not very far from the train and the bus stations and, as Strasbourg public transportation is great with a wide network of tram lines, you should be able to find your Strasbourg hostel very easily. You should be aware that the city is not cheap and Strasbourg hostels are no exception. If you do not book your hostel in Strasbourg in advance, you may be unpleasantly surprised by high prices.

Strasbourg is definitely not a very attractive place for nightlife -- there are not many options for going out, especially during the week. The few available places are nothing special, close quite early, and have high prices. So do not expect wild parties. The city is nice with many things to see and is well connected with buses and trains with other French and European cities. There is also a small airport with limited connections to a few European cities.

There are plenty of frequently asked questions about hostels in Strasbourg. We've collected the most common questions and doubts when it comes to picking your preferred accommodation in Strasbourg. The more you know, the better you can plan with confidence and ease, right?

How much are hostels in Strasbourg?

How to find hostels in Strasbourg?

Hostelz.com shows all 2 Hostels in Strasbourg. Simply filter by neighborhood and price to find your perfect budget place to stay.

What is the best way to find cheap accommodation in Strasbourg?

Hostelz.com compares prices for 2 hostels in Strasbourg, France. We list for you other cheap places to stay in Strasbourg such as

This makes this very website the best place to find cheap accommodation in Strasbourg.

What are the best party hostels in Strasbourg?

éthic étapes - Ciarus is the best rated hostel for partying in Strasbourg.
It offers: Bar.

Travel Tips for Strasbourg - from the Community

Hey fam! Here are a few more tips from the community, from them to you, and you to them. This space is dedicated for travellers to share their best tips on backpacking Strasbourg. Have a closer look - the Hostelz community share real hidden gems, insider knowledge and overall impressions of Strasbourg. Everyone is welcome to add something useful, funny, unexpected and the "absolutely necessary to know before you go" - share, share and then share a little more!

Strasbourg is a charming, old-world city in the heart of the Alsace region with unique, colorful buildings that are a feast for the soul. With delicious cuisine, an abundance of hand-crafted souveniers, an interesting variety of bridges, and the best glace experience in all of Europe (Amorino!), this city is a wonderful place to visit.

Strasbourg...Vive la France! I had my first taste of frog's legs (grenouille) here at a Chinese restaurant just outside of the train station. Very tasty. Not to mention, it was pretty darn cool to hear Chinese people speaking French. (I know, I know, I sound like a dumb American tourist). This was my first trip to Europe, so everything was absolutely incredible to me. I toured Europe with infant eyes. Vive la France!

Hostel? Check! Now let's have at your hostel packing list for Strasbourg and France.