18 hostels available. Prices start from $9 for a dorm bed.
We compare all hostel prices in Sofia for you. So you save money and time!

This section is dedicated to take away all your "I wish someone had told me that before I went!" experiences. This way, you can spend less time settling in, and more time making new friends in your chosen hostel. We share our insider knowledge of tips, tricks and important things to look out for in Sofia. 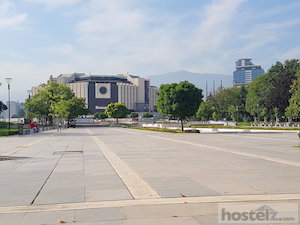 At first glance, Sofia might appear as yet another one of those heavy, concrete, Soviet-style architectural monsters. However, the Bulgarian capital is actually quite an old city, dating back to centuries before Christ -- certainly it wasn’t built just by the Soviets.

Throughout its long history, Sofia saw several invasions and occupations, plus some serious bombings during the World War II; not many of its old buildings survived. Most of the remaining old architecture can be seen inside and around Serdika metro station. Also, on the outskirts of the city there is the medieval UNESCO-listed Boyana Chapel.

Other than that, Sofia is quite a new-looking city. Luckily, the straight streets and building blocks are enlivened by the greenery of the city’s abundant parks -- one of those worth a visit is the very central Sofia City Garden. Besides being one of the oldest of its kind in Sofia, it is also the place where heated, informal open-air chess tournaments between middle-aged Bulgarian men take place.

Among other Sofia’s lovable peculiarities are the hot mineral water springs, located next to the Banya Bashi mosque, where locals stop by to fill their bottles with a supposedly healthy drink, and the street market of secondhand books at Slaveykov Square.

Another quirk is the abundant stray dog population. Thousands of homeless dogs – deserted pets and generations of their off-springs – roam around the city in packs. They get more active between the dusk and the dawn, and sometimes attack people. Current law forbids killing the strays; they can only be neutered and let back to the street. Advice on how to scare away the approaching canines circulates in the city folklore, including loud shouting and carrying spray tear gas.

South of the city is the well-loved Vitosha Mountain and the namesake nature park. The area is nicknamed as Sofia’s lungs and is a favourite place for the locals, depending on season, to go hiking and skiing.

If you need more urban life and nightlife, Sofia has it too. Bulgarians are outgoing people, and with the growing admixture of resident international population you get a number of cafes, bars, and clubs from which to choose, ranging from traditional to cosmopolitan to cool.

Sofia’s hostels are scattered all over the city centre. An easy option is to stay somewhere close to the central bus and train stations (north of the city centre) and walk downtown. Otherwise, you can stay in a nicer area and be in the centre of everything. Wherever you stay, walking from one place to another should not take long -- just keep an eye on the city’s uneven pavers so that you don’t end up with your nose broken.

Overall, visiting Sofia is perhaps not as much about admiring the views as about what is happening there. You may have your thoughts refreshed, learn about history in one of the city’s museums, and go out to party and meet people.

We've collected the most common questions for hostels in Sofia. The more you know, the better you can plan with confidence and ease, right?

This makes Hostelz.com the best place to find cheap accommodation in Sofia.

Above we list every single hostel there is in the city. Let us take a broader look at what you can expect - and what not. We created this cheatsheet for you to get a more complete picture of the hostel quality in Sofia, average prices and types of hostels to choose from.
18 Total number of hostels
$19 Average dorm price
$42 Average private room price
$9 Cheapest hostel in Sofia
10 Coins Hostel Sofia is the cheapest
7 Party hostels in Sofia
Hostel N1 in Sofia is the best rated
5.6 Average rating of all hostels

Travel Tips for Sofia - from the Community

Travel Tips for Sofia - from the Community

Hey fam! Here are a few more tips from the community, from them to you, and you to them. This space is dedicated for travellers to share their best tips on backpacking Sofia. Have a closer look - the Hostelz community share real hidden gems, insider knowledge and overall impressions of Sofia. Everyone is welcome to add something useful, funny, unexpected and the "absolutely necessary to know before you go" - share, share and then share a little more!