Welcome to your detailed guide for hostels in Wollongong, Australia. You can choose from 1 Wollongong hostels. In total, there are 3 cheap places to stay in Wollongong such as guesthouses and bnbs. Prices start from $26 for a dorm.

This section is dedicated to take away all your "I wish someone had told me that before I went!" experiences. This way, you are better prepared for what to expect, what not to expect and can spend less time settling in, and more time making new friends in your chosen hostel. We share our insider knowledge of tips, tricks and important things to look out for in Wollongong. To help you make friends with Wollongong before you visit, we've included a few helpful and fun things you should know about the area. Enjoy!

Guess what? Wollongong is also named and spelled The Gong - It is the same destination. Goodbye confusion. 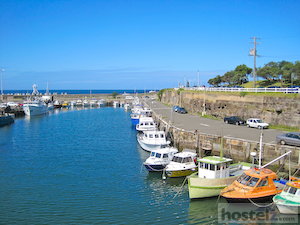 Wollongong "the Gong" is seaside city, an hour south of Sydney with a few hostels in Wollongong providing budget accommodations. It has a population of just under 300,000 people, and an internationally recognized University with 22,000 students. The city gets a lot of tourists as it is known for its great beaches and surfing. It also has a beautiful lookout and a lighthouse downtown.

There are a couple of Wollongong hostels located in the downtown area, which has a lively bar scene during the weekend as it is a student town. However, early on in the week the town can be pretty empty. For a medium-sized city, Wollongong is full of restaurants with an array of different kinds of restaurants all over town. Overall, the restaurants have a very Asian feel, and you can get delicious meals for a very cheap $10. For some delicious seafood head towards the beach, as there are some lovely seafood restaurants right on the water. These restaurants are a lot more upscale and have excellent food and presentation, but be prepared to shell out a considerable amount of more. Many restaurants offer a bring your own wine special, and often charge $1.50 or $2 per person for corkage.

There are quite a lot of things to do around Wollongong. Ride the surf at the lifeguarded North Beach, or take a surf lesson at surf school. Go tandem skydiving over the North Beach and soar in a parachute and take in the gorgeous coastline. Climb Mt. Keira for beautiful views. Near the University of Wollongong, there is a Botanical Gardens, which has beautiful rainforest and local tropical birds. Wollongong also has its own Science Centre and Planetarium.

If you're a sports fan, try watching a game of rugby league (called 'footie' by the locals) at the local stadium by City Beach. The local team the St. George Illawara Dragons are quite a good team, and won the Grand Final last year. Occasionally, the stadium also hosts concerts or theatre.

If you have a car, there are plenty of excellent attractions surrounding Wollongong. The Nan Tien Temple, the biggest Buddhist temple in the southern hemisphere, does cheap guided tours on the weekends. It also offers lunch, and classes in origami, tai chi, and calligraphy. Or drive along the Prices Coastal Highway down to Kiama to see the famous Blowhole. Before heading back to your hostel you might also want to drive up towards Sydney to the excellent Symbio Zoo, where you can have close up encounters with native Australian animals, including koalas, wallabies, and kangaroos.

There are plenty of frequently asked questions about hostels in Wollongong. We've collected the most common questions and doubts when it comes to picking your preferred accommodation in Wollongong. The more you know, the better you can plan with confidence and ease, right?

How much are hostels in Wollongong?

How to find hostels in Wollongong?

There is exactly 1 Hostel in Wollongong, Australia. Hostelz.com compares the prices for this hostel so you can get the best price on any major booking site.

What is the best way to find cheap accommodation in Wollongong?

Hostelz.com compares prices for 1 hostel in Wollongong, Australia. We list for you other cheap places to stay in Wollongong such as

This makes this very website the best place to find cheap accommodation in Wollongong.

Travel Tips for Wollongong - from the Community

Oh man, so far no one from the community has left a comment or travel tips for Wollongong. How about you kick start the discussion here? Gather your best backpacking recommendations for Wollongong and jot them down below. The community thanks you.

Hostel? Check! Now let's have at your hostel packing list for Wollongong and Australia.