All Hostels in Buenos Aires

Compare prices for hostels in Buenos Aires with one click. Add your travel dates and see all prices on all hostel booking sites like Hostelworld, Hostelsclub and Booking.com. 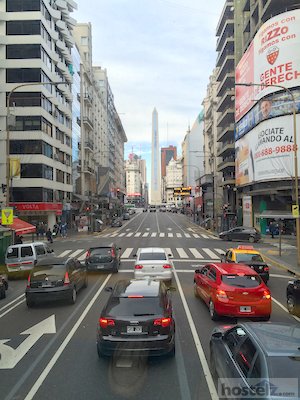 There is a few things you should know about Buenos Aires hostels and the city in general. Besides comparing you the best and cheapest hostels in Buenos Aires, we also highlight what we have liked, disliked and things to look out for.

Step aside, New York ... THIS is the city that never sleeps! Buenos Aires fairly crackles with electricity as it hums with activity both day and night. It offers an endless array of diversions, and its varied and fascinating neighborhoods mean you’ll never run out of places to wander.

This city of 13 million people -- the largest in Argentina – is a complex and fascinating place. Arriving at the immense and chaotic Retiro bus station from calmer destinations may make your head spin, and multiple lanes of traffic whizzing past at high speed will have you approaching intersections with caution. If you’ve just arrived from the laidback tropical ambience of Iguazú, or from the vast empty stretches of Patagonia, you may find yourself overwhelmed by the frenetic pace at first.

However, if you’re like most visitors to the Paris of the South, once you've checked into your Buenos Aires hostel you’ll quickly grow to love this city. Innumerable museums catering to every interest and passion are scattered throughout the city. There’s usually a soccer or football game being played somewhere (live or on TV) if you’d rather check out the beautiful game and the city’s legendary football fanatics. You can wander the market in the colonial streets of San Telmo where many Buenos Aires hostels are located, or check out a tango show in the colorful working-class neighborhood of La Boca; further afield, Palermo’s vast open green spaces beckon you to spend a day outdoors, or the upscale glitz of Recoleta may beguile you as you make your way to Evita’s grave in its famous cemetery.

For an easy day trip, you can choose to take a ferry over to Colonia, Uruguay from your Buenos Aires hostel and enjoy its 16th-century cobblestoned charm, or head out to one of the peaceful suburbs such as Tigre, with its attractive canals and backwaters.

Most Buenos Aires hostels are found in the microcentro, near the Plaza de Mayo, or in neighboring San Telmo. The efficient and cheap Subte, Buenos Aires’ comprehensive subway network, will take you just about anywhere you need to go.

Things to do in Buenos Aires

Here is a few more tips from the community. Other travelers share their best tips on backpacking Buenos Aires:

I lived in Buenos Aires for six months and I truly fell in love with the people, the cafes, and the whole experience. The city itself is a great mixture of European style and Spanish mannerisms and traditions. The language "Castellano" is a beautiful language that sounds like Spanish and Italian. You must experience an authentic asado (steak) grill out somewhere. You must find your favorite cafe and restaurant and sit and eat amazing food, drink the best coffee, and people watch. Also, embrace the life of the people -- go to dinner late, go and dance even later! After all Buenos Aires has Mate tea and Medealunas (sweet croissants) to energize your entire day!

The central Buenos Aires is the heart of the city. Recoleta is a boring place where all you see is cars passing, embassies, and rich Argentinians paying twice what you would pay anywhere else in the city for a lunch that is pretty much the same. Same thing happens with Palermo, except for a couple spots that are good for shopping and having a beer. Downtown is not unsafe at all. Anyway don't be scared in Buenos Aires or pretty much anywhere in South America -- people say a lot of crap but you only discover the places by digging deep inside them, so go ahead and use your common sense.

I lived in Buenos Aires for three months. The cute train up to Tigre offers a nice day trip but not much more, jump out at the odd beach or shopping mall. I'd recommend staying in Palermo or Recoleta as they're a bit more like suburbs. Don't stay in Central, it's full of beggars, crap food, and you can feel a bit unsafe, similarly with San Telmo. It's cheaper to get a taxi to Desnivel in san Telmo, eat and return than it is to eat in Central, and the food in central is tourist rubbish. These are the places you'd visit, but getting taxis is easy and they're cheap. Argentinians prefer salsa and Reggaeton, Tango (and Evita) is namely for tourists (try it in San Telmo or watch it in a cafe in La Boca). Never go to La Boca at night. And the newest barrio, Puerto Madero is a bit cold (and pricey in US dollars) and dull, like Canary Wharf in England, but it is close to the park where you can hire a bike which is a nice break from a crazy city. If you have time, take the buquebus across the river to Colonia, the most beautiful place I've ever seen, and it's very safe too.

I loved San Telmo. It was vibrant and cultural with great cafes and excellent restaurants and of course it is the home of Tango. I spent two weeks there and it became home from home.

Tigre and Delta is one of the best attractions of Argentina -- nature, great architecture, and cool places. I live ten minutes away from Tigre and I love it. It's a unique landscape. The world has few deltas, Tigre is one of them, and this has urban area, ecological area with thousands of rivers, and nautical sports -- rowing and yachting among them. If you don't like the nature, you can to go at the Parque de la Costa (funfair/amusement park) -- it's one of the greatest in South America. Don't forget to walk on the Paseo Victoria promenade -- a street on the coast of the river. The place has many historical clubs of rowing, the Argentine maritime museum, where you can watch the naval history through model scale ships, and an amazing, really wonderful art museum on the historic palace, with a balcony that crosses over the street and to the river. Don't forget to travel to Tigre on Tren de la Costa (tourist train) -- a cool ride through the river de la Plata coast, the surroundings of the north side of Buenos Aires.

Buenos Aires is amazing! We spent a week there and were completely entertained. Don't miss Recoleta. The food and shopping are fantastic -- and cheap. Do not waste a day going to Tigre -- it's boring.