The Bulldog Hotel Amsterdam is listed at the following booking sites:

How is The Bulldog Hotel Amsterdam rated on booking websites?

Much more than expected. A secure entry with very very welcoming person during the night shift. (day shift not much to say). The ambiance and the restaurant was great and the mix rooms very friendly other guest, really enjoy it.

I stayed at this place because it was highly rated across multiple Internet sites. I went the week before thanksgiving on a 2 day layover before I went to Istanbul. It's moderately priced and conveniently located. BUT, this place wreaks of cigarette smoke throughout, the common showers and toilets are not very well maintained, and if you have any type of ALLERGIES RELATED TO MOLD OR SMOKE IN ANYWAY WHATSOEVER DO NOT STAY HERE! I cannot stress this enough. After attempting to sleep, I woke up less than 2 hours later with an itchy throat and watery eyes, I tried walking it off in the cold, clean, crisp Dutch air to no avail. I went back in the hostel, grabbed my things and checked out immediately. In the five minutes it took me to do this I began to have major swelling around my eyes, and my nasal cavities completely closed to the point where I could only get air through my mouth. I checked into another hotel in the middle of the night. However, the damage was done. I left and hailed a cab. My throat began to swell and my breathing was labored. When I got to the hospital they told me I was on the verge of anaphylactic shock and that if I didn't come when I did that I would not have lived through the night. Like I said great location, good value. However, DO NOT STAY HERE IF YOU HAVE ANY ALLERGIES OR SENSITIVITIES TO SMOKE AND/OR MOLD.

You cannot beat the location, right in the heart of the red light district. Breakfast is included and adequate. There is an attached coffee shop with decent prices on their goods, fair for the district, but you can find better prices if you walk a bit further. Dutch fish sandwich cart right outside! Must have! 30 euro is quite steep for a hostel, but I figured because it was the location. The facilities are good enough. Bathrooms are clean enough, lockers in the room. Hard to find cheaper that is party friendly and at that location.

The Bulldog Hotel is pretty cool for Amsterdam because it's located right in the red light district on a canal but it has strict security so they keep the sketch factor outside the hostel. Plus there's a coffee shop in the hostel and you can smoke weed in the bar (not cigarettes).

From the train station exit towards the city center and cross the bridge over the canal. From here take the big street Damrak down to Damsquare. Cross the square and go down Damstreet until you reach the first canal. Turn left down the street before crossing the first canal. The Bulldog is on the left at Oudezijds Voorburgwal 220, the second door with a bulldog sign hanging over it, the first is the coffee shop.

It's important to note that this hostel is right in the red light district therefore the people nearby may be seedy, like dealers (don't buy hard drugs from the dealers outside on the street) and stoned tourists looking for paid sex, but otherwise the location is great. Everything in Amsterdam is pretty much within walking distance and this hostel is a stone's throw away from the main market square and it's on a canal. The only downside about the location is that the more popular going out area, Leidseplein, is quite the drunken stumble away.

In order to get into the hostel you have to show the little card they give you at check in and then for the rooms there is a keycard, so the hostel itself is pretty safe. The rooms aren't the most spacious but at least they aren't dirty, just untidy. The beds are seriously the most comfortable hostel beds we've ever slept in, and it's not because we were stoned. There are lockers for valuables and some rooms have ensuite facilities.

The bathrooms are not awful but they leave something to be desired. There is a tiny bathroom with a toilet and teeny tiny sink and another bathroom with a toilet, two sinks, and two showers. There are a few problems with this bathroom. The first is that the showers flooded the bathroom and the drains are up a slight step from the rest of the flooded floor and therefore the bathroom floor is always a wading pool despite there being a squeegee to mop it up. It's hard to mop the water up the step into the drain. The second major problem is that the two showers have no separate changing area, which makes sharing the bathrooms with a stranger quite awkward, and there's almost nowhere dry to leave your stuff except the two hooks across the bathroom on the back of the door.

In the in house bar area aside from the bar there is a space with a big screen TV for playing video games and relaxing. In the lobby there are some tables for guests to enjoy outside food and beverage as none are allowed in the rooms. There is also a joint Bulldog coffee shop one door down the street where guests can enjoy Amsterdam's drug tourism. Breakfast is included in the price of the room and is pretty good in terms of what hostels normally have to offer, the only downside is this is Amsterdam and breakfast ends at 10 a.m. or so. For breakfast there are hot cross buns with the usual jam, butter, chocolate spread, yogurt and muesli, milk, orange juice, tea and coffee.

As much as this hostel has a really chill atmosphere, it's not the most social place. People mostly check in in groups and stick to their little units. It's important to note that the hostel doesn't permit large groups or stag type parties but it still seems as if everyone is there with a large group of friends. This place isn't really tailored to the single traveler. The hostel really isn't very loud -- the only noise problems are usually caused by the other people in your room.

Overall this hostel is pretty cool for a weekend away with a group of friends but it's a little too party in a party city to get much serious sightseeing done. You should also note that they have a strict no guests policy and a list of rules you must abide by or risk getting fined or kicked out. 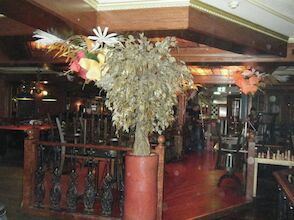 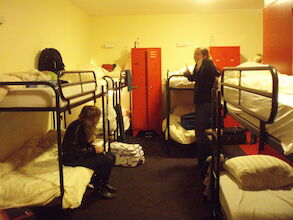 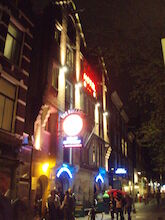 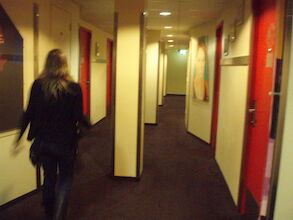 I couldn't ask for more!

I was here for the Queens day celebrations. As a single female traveler I felt so safe here and was really comfortable. Everything was clean and the staff were really helpful. I would stay here again for sure. The beds were really cozy.

the bulldog itself was good , clean , friendly . the place was easy to get to from centraal station and easy walking distance to the station , trams and everything else . the only downfall was that the smoke from people who smoked weed . but everything was excellent .

What do you say about the Famous Bulldog. Always full especially at the weekends, book well in advance! Right in the middle of the red light district the fleshpots of Amsterdam are but a short walk away. Museums and the more cultural items are a bit further however, you will need to walk for at least twenty minutes to get to the Van Gogh Museum for example. The Bulldog itself is very large with a large bar often crowded with a diverse assortment of weedheads, tourists, and backpackers. The bar is big enoiugh that you don't get overwhelmed by weedyness like you do in some other hostels. There is no kitchen here and the menu is limited but there are loads of cheap eats in Amsterdam so unless your really picky you should be ok. Security is good although the cleanliness often leaves something to be desired, especialy some of the dorm showers which really should be cleaned two or three times a day. I had to clean the one in my dorm room before I felt I could use it. Also the reception staff can be a little surly and uncommunicative which is a shame.

the place is really good in terms of food-neatness-facilities etc. one bad thing is the people in there. perhaps, it was bad luck or whatever. most of the people out there are in their early 30s and 40s and are not into communicating too much. most of them come with a partner or something like that. location is also doubtful. it's grand during the day but at night there's a bunch of hookers and drug dealers messing around.

Relax and unwind on the quiet side of the Amsterdam Red Light District, one of the world's best hangouts. The Bulldog Hotel, in the middle of all the action, is a self-styled, clean and cool hostel in the heart of the centre only 8 minutes walk from Central Station.

Amsterdam is a cosmopolitan, thriving and non-conformist place - and 'Amsterdammers' are known throughout the world for their relaxed attitude. We want to be a home away from home for travelers of all ages (sorry, no pets, no children) with limited funds and our staff are very carefully selected to create an ambient, relaxed atmosphere. We promise not to laugh when we see you eating bread with peanut butter 3 times a day for a week!

Our guests can relax in a laid back atmosphere, watch DVD's, play Wii on wide screen TVs in our movie lounge or get pumped up for the vibrant nightlife. Our crew will update you about anything you need to know about the most liberal city in the world.

Why not come to Amsterdam and find out how we really make clogs, cheese and windmills? And when you do, why not visit us? The Bulldog Hotel - the first five star hostel!

The Bulldog Hotel Amsterdam is listed on the following booking sites:

Hostelworld Not listed at Booking.com HostelsClub

www.bulldoghotel.com
Phone Number: +31 (0)20 620 3822
To add or correct information for this listing, please use the Listing Correction Form.

See all 56 hostels in Amsterdam

See all 56 hostels in Amsterdam