Hostels in Valencia - a Detailed Guide 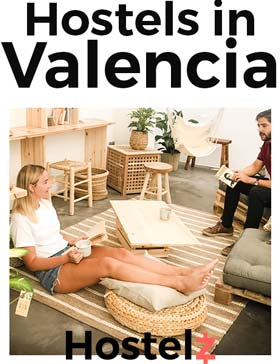 So you are looking for the absolute best and cheapest hostels in Valencia, Spain? In total there is 18 Hostels in Valencia. They differ in location, price and especially quality. Hostelz.com lists all of them for you - and tells you which one is your personal, best fit.

Valencia is an amazing city! There are beaches, mountains, and historic sites (all of which are gorgeous)! There is always plenty to do around this great city and the weather always tends to be mild! There are loads of restaurants, shops, shopping malls, and food stands (don't miss out on churros!). Spain has a lot of delicacies that you can find in Valencia (paella, balls of pork in blood, and calamari).

Here are some quick facts about hostels in Valencia Spain to help you in your search.

Valencia hostels can be found all throughout the city -- there is at least one about a ten-minute walk from the train station. However, don't confuse "hostel" ("albergue" in Spanish) with the Spanish word "hostal" (a hostal is a family run cheap hotel with dorms, where you won't find the same social environment as a hostel ("albergue").

The city can be reached by pretty much any kind of transportation (airplane, train, bus, car, and bus-ferry-bus). Generally the city is easier to get around by foot if you are staying in the historic center, while the beach is easily reached by metro. The transportation is fairly good in Valencia and not too pricey (although the metro does not go through the city center). If you are driving a vehicle and go to the beach, beware -- some of the beaches have parking spots monitored by children you pay to "protect" your car (we were with locals when this occurred, so it was not foreigners getting duped). The city is really safe (so long as you are not completely clueless about walking around a large city).

The people are very friendly in Valencia, but don't wear other football teams' jerseys here, as the Spanish are very passionate about their soccer/ football teams -- a shouting match may ensue, but nothing more. They speak Catalan (a Spanish-French mix), however, they all know Castilian Spanish (the Spanish that is taught in schools).

The best time to visit Valencia is during Las Fallas (they display painted paper mache sculptures throughout the city center, and eventually burn all of them; although not as well known internationally as other festivals in Spain, it is the largest festival in Spain). Las Fallas occurs the week before Semana Santa (Easter week) in March.

During the festival they have the gorgeous sculptures they've worked on for an entire year, astonishing fireworks, street food, parades, pageants. It is also a week of repentance (you will see people dressed in garb similar to the KKK, but they are NOT part of the KKK/anything like it, it is a costume they have used for much longer than the KKK; it is simply to hide the identity of the repenter as the repentance is between the repenter and God). While Las Fallas is an amazing festival, Semana Santa is a tad scary (they run a fake Jesus on an open sedan chair through the streets of the city center while people throw things at him and shout).

A colourful, homely hostel that’s located seconds away from Mercado Central and directly opposite La Lonja de la Seda. There are no bunk beds here; only single beds! Choose between mixed & female-only dorms, or a private twin room. Each room is covered in street-art style murals, with beautiful traditional Valencian tiles on the floor. Get to know travellers at the free family dinners (with sangria), in the comfy common room, or by joining a free walking tour and pub crawl. ... more details 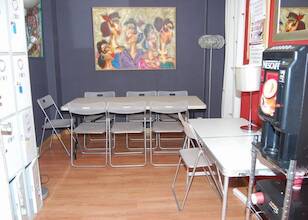 "…, no smoking (though the owners smoke all the time and shares it everyone). No washing, no drying of clothes, no staying in the room from 1 a.m. till 2 p.m. due to cleaning, paid internet, no possibility of leaving any bags or luggage! Rattling doors as all locks were broken, glass windows in Bathrooms and rooms, very little privacy, under consta ... more details 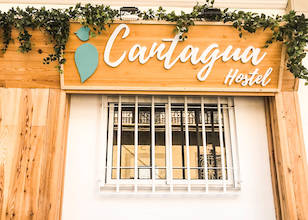 An eco-friendly hostel with a cozy home-away-from-home vibe. Situated in a vibrant and creative pocket of Valencia, surrounded by coffee bars, live music and local food. There are shared dorms only here (+ female dorm), no privates. You’re going to love the privacy pod-style beds! BYO alcohol is welcomed, though quiet time kicks in at 11:30pm. There is also a shared kitchen and library onsite. ... more details

Colourful, spacious, warm - a few words to describe Purple Nest Hostel. This is a great party hostel, boasting a hostel bar and awesome activities. From tapas tours, to pub crawls. Located in Ciutat Vella (Old City) neighborhood, there’s tons to do within easy walking distance. Spread out on the terrace or in the common room. Choose between family rooms, mixed and female dorms - all of them come with air conditioning. ... more details

The central setting of The River Hostel is perfect for solo travellers. The free walking tours and on-site bar make for great socialising opportunities. And the rooms - wow! Look forward to your very own privacy curtain, lamp, locker & charging socket. Grab a free map, rent a bike or simply relax in the games room and lounge. Also; the cafe serves up a yummy breakfast for a few extra coins. ... more details

"…We met a lot of new people there with who we went to the beach, or go for drink. I found it very clean, very friendly staff, and good beds. If you arrive there in the weekend, i would advise to book in advance. One of the best hostels we stayed at during our month long trip. Absolutely amazing and friendly staff who speak great English. Clean bat ... more details 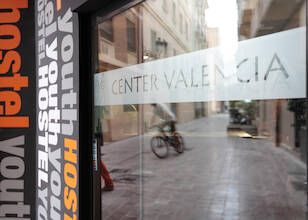 At Center Valencia Youth Hostel you can relax on the rooftop, surrounded by historic buildings. It has all of the essentials: free breakfast, good Wifi, communal kitchen. And! There is a free daily walking tour to join, plus fun pub crawls. Rooms range from smaller 4-bed dorms, to a more sociable 12-bed option. A private double is perfect for couples. Reception is open 24/7 & during the summer there are rooftop BBQs. ... more details

Looking for luxury? Quart Youth Hostel mixes swanky interiors with chandeliers - it’s hotel meets homely vibe. Custom made bunks with privacy curtains and proper staircases await you. Make use of the fitness room, leather sofas and that all important cafe coffee. It’s in a great location, too; less than 10-minutes from Ciutat Vella on foot. The fast & reliable WiFi and ample space make this a great choice for digital nomads. ... more details

This brand new hostel offers vivid decor and over 100 years of history. The hostel bar is a great place to enjoy breakfast, Valencian cuisine and a drink before hitting the town. Dorm rooms are spacious and come with 4-10 beds. Each one has a personal light, socket & electronic locker (no padlock needed!). The large terrace on the top floor is the best place for meeting new people. Other perks: communal kitchen, no curfew, chill zone with games & TV. ... more details

Pension Universal is located right next to Valencia’s main square. It’s a quiet, relaxing accommodation that’s ideal for sociable couples. That’s because there are more private rooms than there are dorms. Dorms are intimate with a maximum of 4-beds. The bright colours and ceramic tiled floors add to the hotel character. A handy kitchen-dining area will help you save money. ... more details 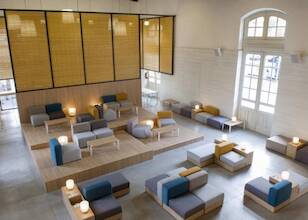 UP Hostel offers you a quirky stay in none other than a train station. That means big, bright spaces, including rooms. There are only dorms here, no privates. Choose either 8 or 16-beds, with a female only option. Watch a film on the projector, chill on the outdoor terrace and enjoy awesome live concerts. Otherwise, rent a bike to explore, or join a free walking tour of the city. A tasty breakfast can be had for a few euros. ... more details

Above we list every single hostel there is in the city. Let us take a broader look at what you can expect - and what not. We created this cheatsheet for you to get a more complete picture of the hostel quality in Valência, average prices and types of hostels to choose from.

(Pensión Universal is the cheapest)

(The River Hostel is the best rated)

There are plenty of frequently asked questions about hostels in Valência. We've collected the most common questions and doubts when it comes to picking your preferred accommodation in Valência. The more you know, the better you can plan with confidence and ease, right?

How much are hostels in Valência?

How to find hostels in Valência?

Hostelz.com shows all 17 Hostels in Valência. Simply filter by neighborhood and price to find your perfect budget place to stay.

Which hostels in Valência are good for couples?

Valencia Lounge Hostel is the best hostel in Valência for couples.

What are the best hostels in Valência for groups?

HI - Valencia - Red Nest Hostel is the best hostel in Valência for groups.

What are the coolest hostels in Valência for female solo travellers?

Cantagua Hostel is the best rated hostel in Valência for female solo travellers.

What is the best way to find cheap accommodation in Valência?

Hostelz.com compares prices for 17 hostels in Valência, Espanha. We list for you other cheap places to stay in Valência such as

This makes this very website the best place to find cheap accommodation in Valência.
What are the best party hostels in Valência?

The River Hostel is the best rated hostel for partying in Valência.
It offers: Bar.