This section is dedicated to take away all your "I wish someone had told me that before I went!" experiences. This way, you are better prepared for what to expect, what not to expect and can spend less time settling in, and more time making new friends in your chosen hostel. We share our insider knowledge of tips, tricks and important things to look out for in Haverfordwest. To help you make friends with Haverfordwest before you visit, we've included a few helpful and fun things you should know about the area. Enjoy! 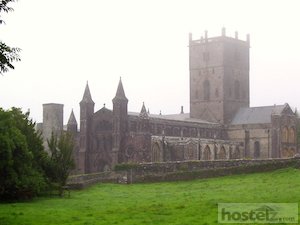 Haverfordwest is the central transportation hub for most of the Pembrokeshire area, in the southwest region of Wales. It is easy to reach by train and bus, though make sure to check the schedules, because the local buses often stop running before long-distance coaches (like National Express) make it into town.

There are some interesting sights to see in town. The castle is in serious disrepair, but free to see. There is a small museum that only is open in the summer. Head out to St. David's for the day, to see the cathedral there, or go to the coast for stunning views of the cliffs. If you like fishing, you can fish in town, though you need a permit, which you can get for the day at a decent price; if you want to head out to the coast, fishing is free.

Nightlife usually is pretty low key. Eddy's Club is the most popular of the clubs in Haverfordwest, but be careful, because it will get rowdy later on in the night. There are several pubs in town, which are fairly decent, in Castle Square. The Castle Hotel has cheap drinks and karaoke on Saturday nights. The Friar's Vault has friendly service and superb food at a very reasonable price.

There are plenty of places to shop for food -- including an Aldi's and a Tesco -- and plenty of petrol stations if you are coming by car. There are also ATMs, but if you are visiting any smaller towns in the Pembrokeshire area, there might not be any ATMs there. Hostels in Haverfordwest are not usually overbooked, except during Bank Holidays, so glance at the calendar before making your trip, or else book ahead of time.

There are plenty of frequently asked questions about hostels in Haverfordwest. We've collected the most common questions and doubts when it comes to picking your preferred accommodation in Haverfordwest. The more you know, the better you can plan with confidence and ease, right?

How to find hostels in Haverfordwest?

Hostelz.com shows all 2 Hostels in Haverfordwest. Simply filter by neighborhood and price to find your perfect budget place to stay.

Which hostels in Haverfordwest are good for families?

Hostel Broad Haven YHA is the best hostel in Haverfordwest for families.

What is the best way to find cheap accommodation in Haverfordwest?

This makes this very website the best place to find cheap accommodation in Haverfordwest.

What are the best party hostels in Haverfordwest?

Travel Tips for Haverfordwest - from the Community

Hostel? Check! Now let's have at your hostel packing list for Haverfordwest and Wales.