1 Hostel in Vung Tau available. Prices start from $6 for a dorm bed.
We compare all hostel prices in Vung Tau for you. So you save money and time!

This section is dedicated to take away all your "I wish someone had told me that before I went!" experiences. This way, you can spend less time settling in, and more time making new friends in your chosen hostel. We share our insider knowledge of tips, tricks and important things to look out for in Vung Tau. 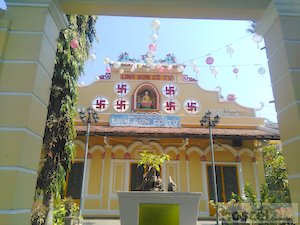 If the bright lights and busy bars of Ho Chi Minh are getting to be too much for you, head to Vung Tau, Vietnam, for some sun, seafood, and karaoke. This seaside town is only a short bus ride away from Saigon and well worth the trip.

Vung Tau is very popular with the Vietnamese population, so if hanging out with locals, eating delicious street food, and singing karaoke is your thing, then you will feel right at home here. If you are heading to Vung Tau on the weekend, be prepared to be the only foreigner in town, on the plus side, the Vietnamese tourists are extremely friendly and will definitely want you as their new friend.

As it's a seaside city, at night the streets are lined with stalls and barbecues selling super fresh seafood at incredibly low prices. You will be spoiled for choice with the amount of variety, and at such affordable prices, nothing is out of your budget. After you are finished with your seafood feast you will find at least three karaoke bars on every street, so grab a Saigon beer and give your inner pop star a new lease on life. Things can go on quite late on the weekend, so be prepared and take earplugs for those early nights.

Most people are more than aware of the Christ the Redeemer statue that overlooks the city of Rio de Janeiro, Brazil. However, very few people are aware that there is an equally, if not more impressive, version in Vung Tau. The statue stands at thirty-two meters, compared to its counterpart in Rio that stands at thirty meters tall. The statue is within a short walk of town; however, with tropical temperatures year round, be sure to carry a lot of water and wear sunscreen. Also as it's a religious site, make sure that you dress modestly -- make sure you have your knees and your shoulders covered, at least!

We've collected the most common questions for hostels in Vung Tau. The more you know, the better you can plan with confidence and ease, right?

This makes Hostelz.com the best place to find cheap accommodation in Vung Tau.

What are the best party hostels in Vung Tau?
Tomorrow Hostel Vũng Tàu is the best hostel for partying in Vung Tau.

Travel Tips for Vung Tau - from the Community

Travel Tips for Vung Tau - from the Community

Oh man, so far no one from the community has left a comment or travel tips for Vung Tau. How about you kick start the discussion here? Gather your best backpacking recommendations for Vung Tau and jot them down below. The community thanks you.