Hostels and Cheap Places to stay in Jinja, Uganda

There are no hostels in Jinja listed. We list for you other cheap places to stay in Jinja, Uganda.
We compare all hostel prices in Jinja for you. So you save money and time!

This section is dedicated to take away all your "I wish someone had told me that before I went!" experiences. This way, you can spend less time settling in, and more time making new friends in your chosen hostel. We share our insider knowledge of tips, tricks and important things to look out for in Jinja. 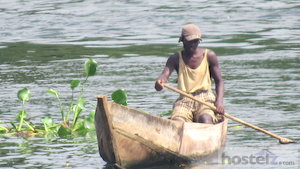 Jinja, Uganda -- on the northern shores of Lake Victoria -- is either the first or last port of call for travelers moving between Uganda and Kenya. It is located just over a hundred kilometers west of the Busia border, and eighty-five kilometers east of the capital Kampala. Jinja is a pleasant town to wander around with its crumbling Colonial buildings, but travelers tend to come here for the activities. In fact, some organize these from Kampala, as it's an easy trip of less than two hours to Jinja from there.

This is the adrenaline capital of East Africa. Most of the activities here focus on the water -- white-water rafting and kayaking are extremely popular -- but land-based activities like horse riding, quad biking, mountain biking, and bungee jumping are also widely available.

Jinja is one of the most spectacular places in the world to do white-water rafting, with grade four and five rapids. There are large number of operators in Jinja, most of which are attached to the Jinja, Uganda hostels and guesthouses. There are several budget hostels in Jinja, Uganda, all spread around this small town, all of them with a travel and tour desk to get you moving. The Jinja, Uganda hostels are able to organize pretty much anything guests might be interested in, from adrenaline sports to bird watching or visiting the Nile Brewery.

Jinja is marketed as the "Source of the Nile," although other towns and countries have their own version! Water from Lake Victoria flows into the river as it winds its way north all the way to northern Egypt and you can visit the point where this happens and see the Speke Monument, commemorating the British explorer who first declared Jinja the source in the mid-nineteenth century.

Travel Tips for Jinja - from the Community

Travel Tips for Jinja - from the Community

Oh man, so far no one from the community has left a comment or travel tips for Jinja. How about you kick start the discussion here? Gather your best backpacking recommendations for Jinja and jot them down below. The community thanks you.