2 hostels available. Prices start from $43 for a dorm bed.
We compare all hostel prices in Yosemite for you. So you save money and time!

This section is dedicated to take away all your "I wish someone had told me that before I went!" experiences. This way, you are better prepared for what to expect, what not to expect and can spend less time settling in, and more time making new friends in your chosen hostel. We share our insider knowledge of tips, tricks and important things to look out for in Yosemite. To help you make friends with Yosemite before you visit, we've included a few helpful and fun things you should know about the area. Enjoy!

Guess what? Yosemite is also named and spelled Yosemite National Park - It is the same destination. Goodbye confusion. 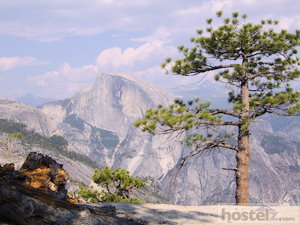 Yosemite, an Unesco World Heritage listed National Park, is located in the Nevada mountains of north-eastern California. Covering 1,200 square miles and with almost 4 million visitors every year, Yosemite is a majestic place with many outdoor activities and some good hostels.

There are some airports close to Yosemite (Fresno, Merced and Modesto City airports are the closest ones), but no actual airport in the National Park itself. There are train and bus services connecting to Yosemite. You can also drive there yourself, if you have a rental or your own car at your disposal. There are four points of entry to the National Park, but be sure to fuel up before entering, since there aren't many gas stations around and the ones that do exist, sell their gas for a hefty price. The hostels around Yosemite are located in some cases a ways from the park, so a car is a good idea.

Yosemite is home to Yosemite Village, which is the place to start your excursions (if you're into hiking, which is by far the biggest pastime of people traveling to Yosemite). You should check at your hostel or at the information center before taking to the trails, the rangers are a great source of information and they also have the most recent things to know (if some of the trails are closed or if there are weather advisories, etc.).

After choosing your activities and where you want to go in the park, you can park your car (if you have one) and take the free shuttle bus to your destination. The transportation system inside the park works really well and it's highly recommended to make use of it, because some parts of the park are not allowed for personal vehicles. The shuttles run until late, but be sure to check the schedule so you won't be left behind.

There are plenty of frequently asked questions about hostels in Yosemite. We've collected the most common questions and doubts when it comes to picking your preferred accommodation in Yosemite. The more you know, the better you can plan with confidence and ease, right?

This makes this very website the best place to find cheap accommodation in Yosemite.

What are the best party hostels in Yosemite?
HI - Midpines - Yosemite Bug Hostel is the best rated hostel for partying in Yosemite.

Hostel? Check! Now let's have at your hostel packing list for Yosemite and USA.

Above we list every single hostel there is in the city. Let us take a broader look at what you can expect - and what not. We created this cheatsheet for you to get a more complete picture of the hostel quality in Yosemite, average prices and types of hostels to choose from.
2 Total number of hostels
$44 Average dorm price
$120 Average private room price
$43 Cheapest hostel in Yosemite
Yosemite International Hostel is the cheapest
1 Party hostels in Yosemite
HI - Midpines - Yosemite Bug Hostel is the best rated
Most Yosemite hostels are located in
Midpines, Groveland
8.2 Average rating of all hostels

Travel Tips for Yosemite - from the Community

Travel Tips for Yosemite - from the Community

Oh man, so far no one from the community has left a comment or travel tips for Yosemite. How about you kick start the discussion here? Gather your best backpacking recommendations for Yosemite and jot them down below. The community thanks you.