Welcome to your detailed guide for hostels in Long Beach, USA. You can choose from 0 Long Beach hostels. In total, there are 2 cheap places to stay in Long Beach such as guesthouses and bnbs. Prices start from $9 for a dorm.

This section is dedicated to take away all your "I wish someone had told me that before I went!" experiences. This way, you are better prepared for what to expect, what not to expect and can spend less time settling in, and more time making new friends in your chosen hostel. We share our insider knowledge of tips, tricks and important things to look out for in Long Beach. To help you make friends with Long Beach before you visit, we've included a few helpful and fun things you should know about the area. Enjoy! 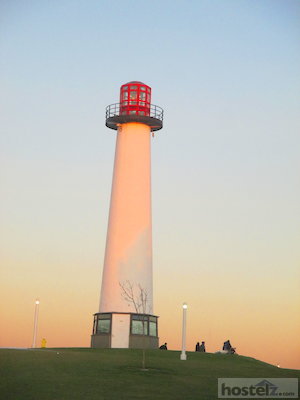 Long Beach, California, USA, is located to the south of Los Angeles. The name is apt, as there is indeed a long, sandy beach which includes a path for cyclists or skaters. It is quite a long walk to reach the pier from central Long Beach.

Hostels in Long Beach, California, USA, are not too common, but nearby San Pedro is another option for hostels in the area. Of course, Hollywood and Santa Monica offer the best choice for hostels in Los Angeles. If relying on public transport, then the metro train blue line will carry you between Long Beach and downtown Los Angeles. For a little bonus sight-seeing, if you look out of the window at the Watts Towers stop, then you can see the towers themselves without leaving the train.

The big tourist attractions in Long Beach are in the bay -- boats, cruise ships, and a small lighthouse. The famous Queen Mary ocean liner is docked here permanently, operating as a hotel that charges entry to attend one of its tours or exhibitions. Nearby, the large "Aquarium of the Pacific" on Rainbow Harbor is popular with families.

"The Pike" was for many years the name of an amusement center in Long Beach. All of the amusements are gone, but the name now applies to a shopping centre, which also has a modern multi-screen cinema and restaurants near the waterfront. It is useful to know that the Long Beach Passport bus provides free travel in a loop around the center connecting with the metro blue line and the Queen Mary and the boarding point for the Catalina Express.

Fourth Street is one of the more eclectic places to visit, with many independent stores that can't be found anywhere else. It is fantastic for lovers of vintage clothes or vinyl records. There is also the "Art Cinema" from the twenties that is beautifully restored and showing regular films on its one screen. Fans of programmatic architecture will enjoy seeing Fourth Street's old-themed building for The Koffee Pot Cafe, which originally opened in the thirties.

Long Beach is a pleasant place to visit, but as it's a conference venue, there are a lot more hotels than hostels in Long Beach, California, USA. It is worth making the journey out of central Los Angeles and taking in a bit more of the area, and Long Beach is a great place to start!

Travel Tips for Long Beach - from the Community

Oh man, so far no one from the community has left a comment or travel tips for Long Beach. How about you kick start the discussion here? Gather your best backpacking recommendations for Long Beach and jot them down below. The community thanks you.

Hostel? Check! Now let's have at your hostel packing list for Long Beach and USA.