Welcome to your detailed guide for hostels in Stone Town, Tanzania. You can choose from 1 Stone Town hostels. In total, there are 1 cheap places to stay in Stone Town such as guesthouses and bnbs. Prices start from $11 for a dorm.

This section is dedicated to take away all your "I wish someone had told me that before I went!" experiences. This way, you are better prepared for what to expect, what not to expect and can spend less time settling in, and more time making new friends in your chosen hostel. We share our insider knowledge of tips, tricks and important things to look out for in Stone Town. To help you make friends with Stone Town before you visit, we've included a few helpful and fun things you should know about the area. Enjoy! 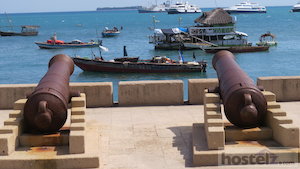 Stone Town, Tanzania, is the old part of Zanzibar City on the semi-autonomous island of Zanzibar, and is hugely popular with tourists and travelers of every type. It is accessible by several daily ferries from Dar Es Salaam; the crossing takes about two hours.

The tiny alleys of Stone Town make for an intriguing wander; initially, travelers will get lost almost immediately. It's a maze of narrow streets, but heading toward the ocean will eventually get you reoriented. Watch out for motorbikes, though; the streets -- too narrow for cars -- are filled with motorbikes and cycles.

Stone Town has so much of interest to see -- it's mostly architectural, with a huge range of styles represented, which makes Stone Town a UNESCO World Heritage Site. Stone Town has been an immensely important port since the eighth century, and became a center of trade for spices and slaves during the nineteenth century. The architecture reflects the diversity of the people who traded here with examples of the original Swahili settlers and the Arab, Persian, Indian, and European traders who came here.

Stone Town's houses are characterized by ornately carved doorways, verandas with carved wooden balustrades, and long stone benches on the outside walls. Most of the major historical buildings can be found on the seafront with many former palaces, churches, mosques, and municipal buildings -- all made largely with coral stone, which gives the town its name. Among the most well-known and striking buildings are the Beit-Al-Ajaib (House of Wonders), The Old Fort, The Old Dispensary, and the Palace Museum. All of these are found on the seafront. Dotted around town are many small old mosques and churches.

Zanzibar is an essential destination for travelers to Tanzania and you might find yourself extending you stay as you get caught up in the Stone Town atmosphere.

There are plenty of frequently asked questions about hostels in Stone Town. We've collected the most common questions and doubts when it comes to picking your preferred accommodation in Stone Town. The more you know, the better you can plan with confidence and ease, right?

How to find hostels in Stone Town?

There is exactly 1 Hostel in Stone Town, Tanzania. Hostelz.com compares the prices for this hostel so you can get the best price on any major booking site.

What is the best way to find cheap accommodation in Stone Town?

This makes this very website the best place to find cheap accommodation in Stone Town.

Travel Tips for Stone Town - from the Community

Oh man, so far no one from the community has left a comment or travel tips for Stone Town. How about you kick start the discussion here? Gather your best backpacking recommendations for Stone Town and jot them down below. The community thanks you.

Hostel? Check! Now let's have at your hostel packing list for Stone Town and Tanzania.