All Hostels in Jiufen

Compare prices for hostels in Jiufen with one click. Add your travel dates and see all prices on all hostel booking sites like Hostelworld, Hostelsclub and Booking.com. 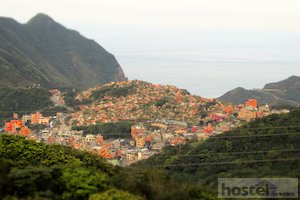 There is a few things you should know about Jiufen hostels and the city in general. Besides comparing you the best and cheapest hostels in Jiufen, we also highlight what we have liked, disliked and things to look out for.

Among the locals, New Taipei Jiufen is mostly famous as the setting for the film "City of Sadness" by Taiwanese director Hsiao-Hsien Hou. However, Japanese and Western travelers year after year choose to stay in hostels in Jiufen for a different reason. Traveling to New Taipei Jiufen feels like crossing the border between dimensions -- the road runs up the misty green hills among the villages and colourful graveyards, and then the bus drops you off in that very old town where little Chihiro found her parents turned into pigs in Miyazaki's famous animation "Spirited Away."

Climbing up the stairs among the strings of red Chinese lanterns, you are waiting for the No-Face from "Spirited Away" to show up and drop a coin at your feet. Walking down the market street, you are ready to see Dragon Haku sliding down from the roof into the neighboring window. Heading into a local shop, you are wondering if Yubaba would jump at you from behind the counter.

The gold mines outside of town mark another significant era in Jiufen's history -- the Japanese WWII occupation, when a prisoner camp was established in the area to use captured soldiers for gold-digging. You can visit the mines and see the untouched rails and tools that probably have not been lifted since the seventies when the mines were deserted and Jiufen was put into a deep coma.

Your Jiufen hostel is the perfect base for visiting these attractions and sights. However, if you are neither into cinema nor a fan of Miyazaki's, and mining history does not interest you that much, make sure to hop to one of the food stalls and taste a variety of dumplings and sweet rice desserts. Whether it rains or not, the mystical fog will leave you under the spell of Jiufen for a long, long while!

Things to do in Jiufen

So far no one of the community left a comment and travel tips for Jiufen. How about you kick off that list here? Just leave your best backpacking recommendations for Jiufen below: